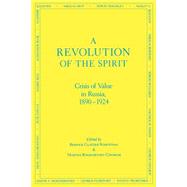 The spiritual revival that is sweeping the Soviet Union today had its genesis in the religious renaissance of the early 20th century. In both cases, it was lay intellectuals, disenchanted with simplistic positivism and materialism, who adapted Russian orthodoxy to modern life. Their ideas reverberated, not only in religion and philosophy, but in art, literature, painting, theater and film. Banned by the Soviet government in 1922, the writings of the religious renaissance were rediscovered in the Brezhnev era by a new generation of Soviet intellectuals disillusioned with Marxism. Circulating from hand to hand in illegal typewritten editions (samizdat), they exerted an evergrowing influence on Soviet society, from the very top down to ordinary people. Under the new policy of glasnost, the government itself is currently reprinting their works. The selections included in this volume reflect the profundity and breadth of their thought and are presented in English for the first time. The recognition of the universal need and significance of spiritual values and ideals united this otherwise heterogeneous group and bears witness to the diversity of their approach to the basic issues of the human condition. The centrality of these lay intellectuals' concerns transcends the specifics of the historical situation in early 20th century Russia and makes their writings relevant to the universal human condition. In order of appearance, the selections are: VLADIMIR SOLOVYOV, The Enemy from the East, The Russian National Ideal; NIKOLAI GROT, On the True Tasks of Philosophy; SERGEI DIAGHILEV, Complex Questions; VASILLY V. ROZANOV, On Sweetest Jesus and the Bitter Fruits of the World; NIKOLAI BERDIAEV, Socialism as Religion; SERGEI BULGAKOV, An Urgent Task; VIACHISLAV IVANOV, Crisis of Individualism, GEORGII CHULKOV, On Mystical Anarchism; DMITRI S. MEREZHKOVSKY, Revolution and Religion, The Jewish Question As a Russian Question; GEORGII FLOROVSKY, In the World of Quests and Wanderings; PAVEL NOVGORODTSEV, The Essence of the Russian Orthodox Consciousness; PETR STRUVE, The Intelligentsia and the National Face; ANDREI BELY, Revolution and Culture; ALEKSANDR BLOK, Catiline; EVGENY TRUBETSKOI, The Bolshevist Utopia and the Religious Movement.

Bernice Glatzer Rosenthal is Professor of Russian History at Fordham University. Among her publications are D. S. Merezhkovsky and the Silver Age and Nietzsche in Russia. Martha Bohachevsky-Chomiak, formerly Professor of Russian History at Manhattanville College and The Johns Hopkins University, is currently at the National Endowment for the Arts in Washington, D.C. She is the author of S. N. Trubetskoi, an Intellectual Among the Intelligentsia and Feminists Despite Themselves: Women in the Ukrainian Community Life.
What is included with this book?