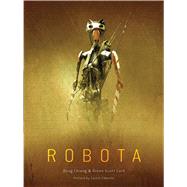 A captivating tale of action, romance, and betrayal, Robota features breathtaking illustrations that add a cinematic scope to every page. Orson Scott Card, author of the award-winning bestseller Ender's Game, collaborated with artist Doug Chiang on the story and wrote the narrative for this visionary work. This edition includes additional, never-before-seen art that Chiang developed for a prospective Robota film. Plus, Gareth Edwards, the director of both Godzilla (2014) and Rogue One: A Star Wars Story (2016), provides a new Preface.
An elaborate study in world-building that traces a human's journey through a preindustrial civilization, Robota explores the relationship between nature and technology. The hero, Caps, awakens with amnesia in a fantastic world of dinosaurs and talking animals — a land of enchantment dominated by giant robots and their sadistic general, Kaantur-Set, who is bent on human genocide. With the help of Juomes, a yeti-like hunter-beast, Caps must battle the tyrannical robots and rediscover his true identity.
Doug Chiang worked for Industrial Light and Magic, where he contributed to such films as Terminator 2 and Forest Gump. He served as design director for Lucasfilm on the Star Wars films The Phantom Menace and Attack of the Clones and as the concept artist for The Force Awakens and subsequent films in the franchise.
Orson Scott Card is the author of the Hugo and Nebula award-winning books Ender's Game and Speaker for the Dead, in addition to all of the books in the Enderverse series. His other science-fiction stories include The Tales of Alvin Maker.
Gareth Edwards is a director, screenwriter, cinematographer, production designer, and visual effects artist. He is best known for directing the 2014 version of Godzilla and the upcoming film Rogue One: A Star Wars Story.
What is included with this book?