The Romance of Arthur: An Anthology of Medieval Texts in Translation 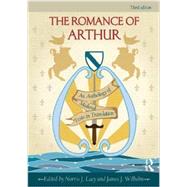 The Romance of Arthur,James J. Wilhelm's classic anthology of Arthurian literature, is an essential text for students of the medieval Romance tradition. This fully updated third edition presents a comprehensive reader, mapping the course of Arthurian literature, and is expanded to fully cover: key authors such as Chrétien de Troyes, Thomas of Britain and Thomas Malory, as well as Arthurian texts by women and more obscure sources for Arthurian romance extensive coverage of key themes and characters in the tradition a wide geographical range of texts including translations from Latin, French, German, Spanish, Welsh, Middle English and Italian sources a broad chronological range of texts, encompassing nearly a thousand years of Arthurian romance Norris J. Lacy builds on the book's source material, presenting readers with a clear introduction to many accessible modern-spelling versions of Arthurian texts. The extracts are presented in a new reader-friendly format with detailed suggestions for further reading and illustrations of key places, figures and scenes. The Romance of Arthurprovides an excellent introduction and an extensive resource for both students and scholars of Arthurian Literature.
What is included with this book?