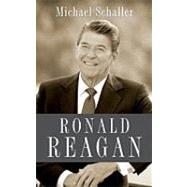 In this short biography, Michael Schaller, acclaimed historian of the American political right, offers readers a poignant account of Ronald Reagan's life and achievements, from his small-town upbringing in rural Illinois to his cinematic success in Hollywood, entry into politics as governor of California, and meteoric rise to the White House, where he served for eight years. The polarizing Great Communicator oversaw many developments that changed the face of American politics and life-the Iran-Contra Affair, the establishment of "Reaganomics," the largest military buildup in peacetime US history--and as such remains a figure about whom much is written and much has yet to be discovered. Schaller revisits each of these episodes during and leading up to the Reagan presidency, taking into account the latest scholarship and research. In doing so, he makes clear their significance at the time and in later years. While most presidential biographies approach 1,000 pages, this succinct narrative comes in at just over 100 pages, continuing the tradition of excellence in brevity established by James McPherson's New York Times bestseller Abraham Lincoln and Alan Brinkley's recent short biography of Franklin Delano Roosevelt. Schaller's biography of Ronald Reagan will be available in time to commemorate the centennial of Reagan's birth, an opportune time to reflect on the accomplishments of America's fortieth president.
Michael Schaller is the Regents Professor of History at the University of Arizona. He has published numerous books about 20th-century American political history and foreign policy, including The Republican Ascendancy and Right Turn: American Life in the Reagan-Bush Era.
What is included with this book?