Running from Office Why Young Americans are Turned Off to Politics 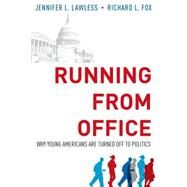 The past two decades of politics in Washington have seen increased partisanship, prolonged stalemates, and numerous scandals. For today's teenagers and young adults, years of ineffective and inefficient political leadership have completely eroded any sense that politicians or government have the ability to do good or effect positive change. Worse, the mean-spirited, dysfunctional political system that has come to characterize American politics has turned young people off to the idea of running for office. With more than 500,000 elected positions in the United States, what will happen when this generation is expected to take the reins of political power?

Through an original, national survey of more than 4,000 high school and college students, as well as more than 100 in-depth interviews, Jennifer L. Lawless and Richard L. Fox find that young Americans feel completely alienated from contemporary politics and express little ambition or aspiration to run for office in the future. The overwhelming majority see nothing particularly noble about those currently in office, viewing most as dishonest, self-interested, and disinterested in helping their constituents. These young people want to improve their communities and enact change in the world; but they don't think politics is the way to achieve these goals. In fact, they look disdainfully upon the prospects of growing up to be a mayor, governor, senator, or even president of the United States. Running from Office explores young people's opinions about contemporary politics and their political ambition (or lack of it). The book paints a political profile of the next generation that should
sound alarm bells about the long-term, deeply embedded damage contemporary politics has wrought on U.S. democracy and its youngest citizens.

As disheartening as their conclusions sound, Lawless and Fox end with practical suggestions for how new technologies, national service programs, and well-strategized public service campaigns could generate political ambition in young people. Today's high school and college students care deeply about improving the future, and it's not too late to ensure that they view running for office as an effective way to do so.

Jennifer L. Lawless is a Professor of Government and the Director of the Women & Politics Institute at American University. Her research focuses on gender, political ambition, and campaigns and elections in the United States.

Richard L. Fox is a Professor of Political Science at Loyola Marymount University. He conducts research on the U.S. Congress, elections, media and politics, and women and politics.
What is included with this book?