Running and Philosophy A Marathon for the Mind 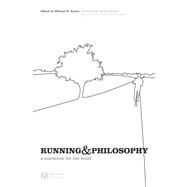 A unique anthology of essays exploring the philosophical wisdom runners contemplate when out for a run. It features writings from some of America's leading philosophers, including Martha Nussbaum, Charles Taliaferro, and J.P. Moreland. A first-of-its-kind collection of essays exploring those gems of philosophical wisdom runners contemplate when out for a run Topics considered include running and the philosophy of friendship; the freedom of the long distance runner; running as aesthetic experience, and "Could a Zombie Run a Marathon?" Contributing essayists include philosophers with athletic experience at the collegiate level, philosophers whose pasttime is running, and one philosopher who began running to test the ideas in his essay
Michael W. Austin is an Assistant Professor of Philosophy at Eastern Kentucky University. A member of the International Association for the Philosophy of Sport, Austin has been published in Journal for the Philosophy of Sport, Southwest Philosophy Review, The Journal of Value Inquiry, Philosophy and Theology, and International Philosophical Quarterly. He is also the author of Conceptions of Parenthood: Ethics and the Family (2007).
What is included with this book?