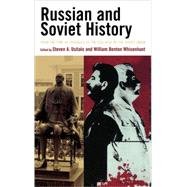 An original and thought-provoking text, Russian and Soviet History uses noteworthy themes and important events from Russian history to spark classroom discussion. Consisting of twenty essays written by experts in each area, the book does not simply repeat the conventional themes found in nearly all Russian history texts, anthologies, and documentary compilations. Rather, it showcases current thinking on Russian cultural, political, economic, and social history from the end of the sixteenth century to the demise of the Soviet "experiment." Informed by archival work in the former Soviet Union and a broad range of published sources, this book is intended to introduce students to Russian history in an accessible and provocative format. Its eclectic essays offer readers an incomparable taste of the complexity and richness of Russia as it has evolved from late Muscovy to the modern era. This text is perfect for undergraduate and graduate students in Russian history and is a great resource for scholars in the field.
What is included with this book?