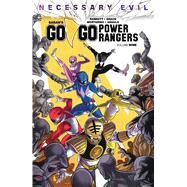 The origin of the Omega Rangers is revealed in this final volume of Saban’s Go Go Power Rangers as one era ends… and another begins!

THE ORIGIN OF THE OMEGA RANGERS!


Tommy must step into his new role as the WHITE RANGER, and the leader of the Power Rangers, even as not everyone is convinced he’ll be able to lead like Jason did. With Lord Zedd seeking his ultimate weapon, will the remaining Rangers of Tommy, Kimberly, and Billy be able to hold him off? Will Zordon and Alpha Five be able to find worthy successors for a complete Power Rangers team?

Meanwhile, Jason, Trini, and Zack must step into their own new roles as they embark on their first mission as the OMEGA RANGERS off world. Will they be able to fend off a new galactic threat, make new allies, and embrace their destiny? In the end, every Power Ranger will need to say goodbye to everything they once knew, each other, and step boldly into a new era!

Collects Saban’s Go Go Power Rangers #29-32.
Ryan Parrott was born in Bakersfield, California, but spent the majority of his youth growing up in Las Vegas. Unlike many modern filmmakers, Ryan didn't immediately gravitate towards the medium, enrolling instead in the art program at the University of Nevada, Reno. But after being exposed to an abundance of new digital formats, he soon discovered that all his art projects shared a similar theme: Film. Transferring to Chapman University in the fall of 2000, Ryan hoped to make an immediate impact within the intimate film studies program. His first project, Ride, was the recipient of numerous awards and screened in over a dozen film festivals around the world, including the 2005 Cannes International Film Festival. His success didn't diminish as he wrote and collaborated on How to Cover-up the Death of your Best Friend, which received the award for best undergraduate film and culminated in producing and co-writing the short horror film, Husk, an official selection of the 2005 Sundance Film Festival. Upon graduation, Ryan directed his first feature film, Loaded, a low-budget independent action drama for Bulletproof Productions. After a short theatrical release, the film was distributed worldwide by Westlake Entertainment.
What is included with this book?