Scalia A Court of One 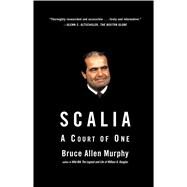 “[Murphy’s] biography of Justice Scalia is patient and thorough, alive both intellectually and morally….Functions as an MRI scan of one of the most influential conservative thinkers of the twentieth century.” (The New York Times): An authoritative, incisive and deeply researched book about of the most controversial Supreme Court justice of our time.

Scalia: A Court of One is the compelling story of one of the most polarizing figures to serve on the nation’s highest court. Bruce Allen Murphy shows how Scalia changed the legal landscape through his controversial theories of textualism and originalism, interpreting the meaning of the Constitution’s words as he claimed they were understood during the nation’s Founding period. But Scalia’s judicial conservatism is informed as much by his highly traditional Catholicism and political partisanship as by his reading of the Constitution; his opinionated speeches, contentious public appearances, and newsworthy interviews have made him a lightning rod for controversy. Scalia is “an intellectual biography of one of [the Supreme Court’s] most colorful members” (Chicago Tribune), combined with an insightful analysis of the Supreme Court and its influence on American life over the past quarter century.

Scalia began his career practicing law in Cleveland, Ohio, and rose to become the president’s lawyer as the head of the Office of Legal Counsel for President Gerald R. Ford. His sterling academic and legal credentials led to his nomination by President Ronald Reagan to the Court of Appeals for the DC Circuit in 1982. In 1986, he successfully outmaneuvered the more senior Robert Bork to be appointed to the Supreme Court.

Scalia’s evident legal brilliance, ambition and personal magnetism led everyone to predict he would unite a new conservative majority under Chief Justice William Rehnquist and change American law in the process. Instead he became a Court of One. Rather than bringing the conservatives together, Scalia drove them apart. He attacked and alienated his more moderate colleagues Sandra Day O’Connor, David Souter, and Anthony Kennedy. Scalia prevented the conservative majority from coalescing for nearly two decades.
Bruce Allen Murphy is the Fred Morgan Kirby Professor of Civil Rights at Lafayette College in Easton, Pennsylvania, where he teaches American constitutional law and civil rights and liberties, American politics, and biographical writing. He is the author of Scalia; The Brandeis-Frankfurter Connection: The Secret Political Activities of Two Supreme Court Justices; Fortas: The Rise and Ruin of a Supreme Court Justice; and Wild Bill: The Legend and Life of William O. Douglas. Murphy lives with his wife in the Lehigh Valley, Pennsylvania.