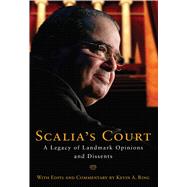 "The passing of this brilliant jurist is a great loss, but his writings—with their plain language and constitutional moorings—will guide generations to come." - Speaker of the House Paul Ryan

The sudden passing of Justice Antonin Scalia shook America. After almost thirty years on the Supreme Court, Scalia had become as integral to the institution as the hallowed room in which he sat. His wisecracking interruptions during oral arguments, his unmatched legal wisdom, his unwavering dedication to the Constitution, and his blistering dissents defined his leadership role on the court and inspired new generations of policymakers and legal minds.

Now, as Republicans and Democrats wage war over Scalia’s lamentably empty Supreme Court seat, Kevin Ring, former counsel to the U.S. Senate’s Constitution Subcommittee, has taken a close look at the cases that best illustrate Scalia’s character, philosophy, and legacy. In Scalia’s Court: A Legacy of Landmark Opinions and Dissents, Ring collects Scalia’s most memorable opinions on free speech, separation of powers, race, religious freedom, the rights of the accused, abortion, and more; and intersperses Scalia's own words with an analysis of his legal reasoning and his lasting impact on American jurisprudence.

“I don’t worry about my legacy,” Scalia once told an audience at the National Archives. “Just do your job right, and who cares?”

Now that "the lion of American law has left the stage,” as the U.S. Attorney General put it, it is for the rest of America to worry about his legacy—and to care.
Kevin Ring has been involved in conservative policymaking and politics for more than 20 years. He began his career in Washington, D.C., as a legislative aide on Capitol Hill. During his tenure, he served as counsel to the Senate Judiciary’s Constitution, Federalism and Property Rights Subcommittee under the leadership of future U.S. Attorney General John Ashcroft.

He also served as executive director for the Republican Study Committee, the largest member organization in the U.S. House of Representatives. Kevin became a lobbyist in 1999 and was twice named one of K Street’s Top Lobbyists. He now serves as the vice president of Families Against Mandatory Minimums (FAMM).

Kevin is a graduate of Syracuse University and the Columbus School of Law at the Catholic University of America in Washington, D.C.