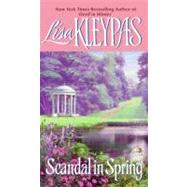 After spending three London seasons searching for a husband, Daisy Bowman's father has told her in no uncertain terms that she must find a husband. Now. And if Daisy can't snare an appropriate suitor, she will marry the man he chooses-the ruthless and aloof Matthew Swift. Daisy is horrified. A Bowman never admits defeat, and she decides to do whatever it takes to marry someone . . . anyone . . . other than Matthew. But she doesn't count on Matthew's unexpected charm . . . or the blazing sensuality that soon flares beyond both their control. And Daisy discovers that the man she has always hated just might turn out to be the man of her dreams. But right at the moment of sweet surrender, a scandalous secret is uncovered . . . one that could destroy both Matthew and a love more passionate and irresistible than Daisy's wildest fantasies.
What is included with this book?

"I shouldn't tell you about it," Daisy railed, pacing back and forth in the Marsden parlor later that evening. "In your condition you shouldn't be distressed. But I can't keep it to myself or I will explode, which you would probably find infinitely more distressing."

Her older sister lifted her head from Lord Westcliff's supportive shoulder. "Tell me," Lillian said, swallowing against another wave of nausea. "I'm distressed only when people keep things from me." She was half-reclining on the long settee, settled in the crook of Westcliff's arm as he spooned some lemon ice into her mouth. She closed her eyes as she swallowed, her dark lashes resting in spiky crescents against her pale cheeks.

"Better?" Westcliff asked gently, swabbing a stray drop near the corner of her lips.

Lillian nodded, her face ghastly white. "Yes, I think it's helping. Ugh. You had better pray for a boy, Westcliff, because this is your only chance at an heir. I'm never going through this again—"

"Open your mouth," he said, and fed her more flavored ice.

Ordinarily Daisy would have been touched by the glimpse into the Westcliffs' private life . . . it was rare that anyone saw Lillian so vulnerable, or Marcus so gentle and concerned. But Daisy was so distracted by her own problems that she barely noticed their interaction as she blurted out, "Father has given me an ultimatum. Tonight he—"

"Wait," Westcliff said quietly, adjusting his hold on Lillian. As he eased his wife to her side, she leaned more heavily on him, one slender white hand coming to rest on the curve of her belly. He murmured something indecipherable into her rumpled ebony hair, and she nodded with a sigh.

Anyone who witnessed Westcliff's tender care of his young wife could not help but take note of the outward changes in the earl, who had always been known as a cold-natured man. He had become far more approachable—he smiled more, laughed more—and his standards for proper behavior had become far less exacting. Which was a good thing if one wished to have Lillian for a wife and Daisy for a sister-in-law.

Westcliff's eyes, so deep a shade of brown they appeared black, narrowed slightly as he focused on Daisy. Although he didn't say a word, Daisy read in his gaze the desire to shield Lillian from anyone and anything that might disturb her peace.

Suddenly Daisy felt ashamed for having rushed over here to recount the injustices dealt by her father. She should have kept her problems to herself and instead she had run to her older sister like a tattling child. But then Lillian's brown eyes opened, and they were warm and smiling, and a thousand childhood memories danced in the air between them like jubilant fireflies. The intimacy of sisters was something not even the most protective husband could disrupt.

"Tell me," Lillian said, nestling against Westcliff's shoulder, "what did the ogre say?"

"That if I don't find someone to marry by the end of May he would choose a husband for me. And guess who that is? Just guess!"

"I can't imagine," Lillian said. "Father doesn't approve of anyone."

"Oh, yes he does," Daisy replied ominously. "There is one person in the world Father approves of one hundred percent."

Now even Westcliff was beginning to look interested. "It is someone with whom I am acquainted?"

"You will be soon," Daisy said. "Father sent for him. He'll be arriving at the Hampshire estate next week for the stag-and-hind hunt."

Westcliff riffled through his memory for the names Thomas Bowman had asked him to include on the guest list for the spring hunt. "The American?" he asked. "Mr. Swift?"

Lillian stared at Daisy blankly. Then she turned her face into Westcliff's shoulder with a squeaky gasp. At first Daisy feared she might be crying, but it quickly became apparent that Lillian was giggling helplessly. "No . . . not really . . . how absurd . . . you could never . . ."

"You wouldn't find it so amusing if you were supposed to marry him," Daisy said with a scowl.

Westcliff glanced from one sister to the other. "What is wrong with Mr. Swift? From what your father has indicated he seems a respectable enough fellow."

"Everything is wrong with him," Lillian said, giving a last snort of laughter.

"But your father esteems him," Westcliff said.

"Oh," Lillian scoffed, "Father's vanity is flattered by the way Mr. Swift strives to emulate him and hangs onto his every word."

The earl considered her words while he spooned up more lemon ice and pressed it to Lillian's lips. She made a sound of pleasure as the frosty liquid trickled down her throat.

"Is your father incorrect in his claim that Mr. Swift is intelligent?" Westcliff asked Daisy.

"He is intelligent," she admitted. "But one can't have a conversation with him—he asks thousands of questions, and he absorbs everything one says but gives nothing back."

Now Daisy couldn't help laughing. "I assure you, my lord, Mr. Swift is not shy. He's—" She paused, finding it difficult to put her thoughts into words.

Matthew Swift's bred-in-the-bone coldness was accompanied by an insufferable air of superiority. One could never tell him anything—he knew it all. Since Daisy had grown up in a family populated with uncompromising natures, she'd had little use for yet one more rigid and argumentative person in her life.

In her opinion it didn't speak well for Swift that he blended in so well with the Bowmans.

Perhaps Swift would have been more tolerable had there been anything charming or attractive about him. But he had been blessed with no softening grace of character or form. No sense of humor, no visible displays of kindness. He was awkwardly formed to boot: tall and disproportionate, and so wiry that his arms and legs seemed to have all the substance of stringbeans. She remembered the way his coat had seemed to hang from his wide shoulders as there was nothing inside it.

Scandal in Spring. Copyright © by Lisa Kleypas. Reprinted by permission of HarperCollins Publishers, Inc. All rights reserved. Available now wherever books are sold.

Excerpted from Scandal in Spring by Lisa Kleypas
All rights reserved by the original copyright owners. Excerpts are provided for display purposes only and may not be reproduced, reprinted or distributed without the written permission of the publisher.