The School of the Americas 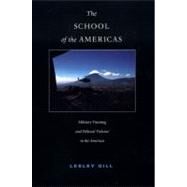 Located at Fort Benning in Columbus, Georgia, the School of the Americas (SOA) is a U.S. army centre that has trained more than sixty thousand soldiers and police, mostly from Latin America, in counterinsurgency and combat-related skills since it was founded in 1946. So widely documented is the participation of the School's graduates in torture, murder, and political repression throughout Latin America that in 2001 the School officially changed its name to the Western Hemisphere Institute for Security Cooperation. Lesley Gill goes behind the façade and presents a comprehensive portrait of the School of the Americas. Talking to a retired Colombian general accused by international human rights organizations of terrible crimes, sitting in on classes, accompanying soa students and their families to Columbus's upscale Peachtree Mall, listening to coca farmers in Colombia and Bolivia, conversing with anti-SOAactivists in the cramped office of the School of the Americas Watch-Gill exposes the School's institutionalization of state-sponsored violence, the havoc it has wrought in Latin America, and the strategies used by activists seeking to curtail it. Based on her unprecedented level of access to the School of the Americas, Gill describes the School's mission and training methods and reveals how its students, alumni, and officers perceive themselves in relation to the dirty wars that have raged across Latin America. Assessing the School's role in U.S. empire-building, she shows how Latin America's brightest and most ambitious military officers are indoctrinated into a stark good-versus-evil worldview, seduced by consumer society and the "American dream," and enlisted as proxies in Washington's war against drugs and "subversion."
Lesley Gill is an Associate Professor of Anthropology at American University.
What is included with this book?