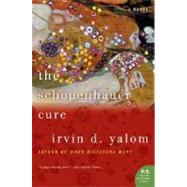 "At one time or another, all of us have wondered what we'd do in the face of death. Suddenly confronted with his own mortality after a routine checkup, distinguished psychotherapist Julius Hertzfeld is forced to reexamine his life and work. Has he really made an enduring difference in the lives of his patients? And what about the patients he's failed? What has happened to them? Now that he is wiser and riper, can he rescue them yet?" "Reaching beyond the safety of his thriving San Francisco practice, Julius feels compelled to seek out Philip Slate, whom he treated for sex addiction some twenty-three years earlier. At that time, Philip's only means of connecting to humans was through brief sexual interludes with countless women, and Julius's therapy did not change that. He meets with Philip, who claims to have cured himself - by reading the pessimistic and misanthropic philosopher Arthur Schopenhauer." "Much to Julius's surprise, Philip has become a philosophical counselor and requests that Julius provide him with the supervisory hours he needs to obtain a license to practice. In return, Philip offers to tutor Julius in the work of Schopenhauer. Julius hesitates. How can Philip possibly become a therapist? He is still the same arrogant, uncaring, self-absorbed person he had always been. In fact, in every way he resembles his mentor, Schopenhauer. But eventually they strike a Faustian bargain: Julius agrees to supervise Philip, provided that Philip first joins his therapy group. Julius is hoping that six months with the group will address Philip's misanthropy and that by being part of a circle of fellow patients, he will develop the relationship skills necessary to become a therapist." "Philip enters the group, but he is more interested in educating the members in Schopenhauer's philosophy - which he claims is all the therapy anyone should need - than he is in their individual problems. Soon Julius and Philip, using very different therapeutic approaches, are competing for the hearts and minds of the group members."--BOOK JACKET.
What is included with this book?