The Science of Philip Pullman's His Dark Materials 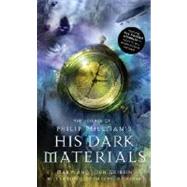 Philip Pullman's His Dark Materials trilogy is renowned for its mystery and magic. What's the truth behind it all? Is the golden compass actually based in science? How does the subtle knife cut through anything? Could there be a bomb like the one made with Lyra's hair? How do the Gallivespians' lodestone resonators really work? And, of course, what are the Dark Materials? Drawing on string theory and spacetime, quantum physics and chaos theory, award-winning science writers Mary and John Gribbin reveal the real science behind Philip Pullman's bestselling fantasy trilogy in entertaining and crystal-clear prose. From the Hardcover edition.
Mary and John Gribbin are award-winning science writers for both adults and children whose books include Eyewitness: Time & Space. John Gribbin has a PhD in Astrophysics from the University of Cambridge and is a Research Fellow in Astronomy at the University of Sussex. The Gribbins live on the Sussex coast in England with two sons, one dog, one cat.


The secret of science, and
all the stars that shine


''She walks in beauty, like the night
Of cloudless climes and starry skies;
And all that's best of dark and bright
Meet in her aspect and her eyes:
Thus mellowed to that tender light
Which heaven to gaudy day denies.''
LORD BYRON


THE HIDDEN WORLD, AND
THE NATURE OF DUST


''There are more things in heaven and
earth, Horatio, Than are dreamt of
in your philosophy.''
WILLIAM SHAKESPEARE


"Dark matter is what my research team is looking for. No one knows what it is. There's more stuff out there in the universe than we can see, that's the point. We can see the stars and the galaxies and the things that shine, but for it all to hang together and not fly apart, there needs to be a lot more of it--to make gravity work, you see. But no one can detect it. So there are lots of different research projects trying to find out what it is, and this is one of them."


As Mary Malone explains to Lyra, there's more to the Universe than meets the eye. At one level, the Dark Materials are Dust--something that can't be seen but is really there, in Lyra's world as well as in our own. But this is also a metaphor for another kind of dark material--hidden knowledge, and hidden forces, like Mrs. Coulter and the General Oblation Board carrying out their plans in secret. And even they don't know what is really going on at a deeper level still. It's like those sets of Russian dolls with one doll inside another, inside another, and so on, right down to a tiny little doll in the middle.
Our Universe is a bit like that. When astronomers started looking at the sky and studying stars and galaxies with their telescopes, they thought that all this bright stuff was all that really mattered. But in the second half of the twentieth century, less than 50 years ago, they found out that they were wrong. They found out that there is ten times more dark matter in the Universe than all the bright stuff put together.
It's like an iceberg. When you see an iceberg floating in the sea, it looks big and white and shiny. But there is actually ten times as much ice underneath the water, hidden in the dark, where you can't see it. This is the idea behind Dust--the Dark Materials of the story. But if you can't see the dark stuff, how do astronomers know that it is there?

Excerpted from The Science of Philip Pullman's His Dark Materials by Mary Gribbin, John Gribbin
All rights reserved by the original copyright owners. Excerpts are provided for display purposes only and may not be reproduced, reprinted or distributed without the written permission of the publisher.