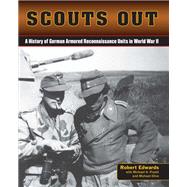 Scouts Out is the definitive account of German armored reconnaissance in World War II, essential for historians, armor buffs, collectors, modelers, and wargamers. The first extensive treatment of the subject in English, it features:
Robert Edwards, a retired U.S. Army armor officer who led a scout platoon, has taught at West Point and is the author of Scouts Out (978-0-9117-1311-5). He has also translated numerous books from German into English. He lives in Navarre, Florida.
What is included with this book?