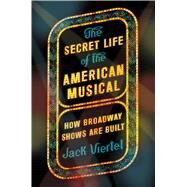 Putting it together, bit by bit: an insiders look at the anatomy of the Broadway musical

For almost thirty years, Jack Viertel has been a major figure in the Broadway theater worldhes helped create shows like Hairspray, Angels in America, and Into the Woods; served as dramaturg of the Mark Taper Forum in Los Angeles; and is currently senior vice president of Jujamcyn Theaters, which host such shows as The Book of Mormon and Jersey Boys. Not long ago, Viertel noticed that while colleges offer intensive classes on Shakespeare's plays, dissecting them line by line to uncover their structure and meaning, there was nothing that dealt with musical theater in the same in-depth way. And why shouldnt there be? he asked. If Shakespeare is Englands national theater, arent Broadway musicals ours?

In The Secret Life of the American Musical, Viertel gives musicals the Shakespeare treatment. The book draws on a range of examplesfrom Carousel to Wicked, The Music Man to The Book of Mormonand personal encounters to paint a picture of how Broadway musicals are made, taking you through all the phases of a typical musical theater story, from opening numbers to finales. Its a hilarious and compelling look at what Viertel has learned over the course of his career, full of observations about the egotists, geniuses, and workaday professionals who have sustained this unique American art form.

Jack Viertel is the senior vice president of Jujamcyn Theaters, which owns and operates five Broadway theaters. He has been involved in dozens of productions presented by Jujamcyn since 1987, including multiple Pulitzer Prize and Tony Award winners, from City of Angels to Angels in America. He has also helped shepherd six of August Wilsons plays to Broadway. He is the artistic director of New York City Centers acclaimed Encores! series, which presents three musical productions every season. In that capacity he has overseen fifty shows, for some of which he adapted the scripts. He conceived the long-running Smokey Joes Cafe and the critically acclaimed After Midnight and has been a creative consultant on many shows, including Hairspray, A Christmas Story, and Dear Evan Hansen. He was the Mark Taper Forums dramaturg and the drama critic and arts editor of the Los Angeles Herald Examiner, and he has spent a decade teaching musical theater at the Tisch School of the Arts at New York University.

Tuning Up: or, How I Came to Write This Book
A Note About the Shows Discussed-and a Few Other Items

1. Overture
2. Curtain Up, Light the Lights: Opening Numbers
3. The Wizard and I: The "I Want" Song
4. If I Loved You: Conditional Love Songs
5. Put On Your Sunday Clothes: The Noise
6. Bushwhacking 1: Second Couples
7. Bushwhacking 2: Villains
8. Bushwhacking 3: The Multiplot, and How It Thickens
9. Adelaide's Lament: Stars
10. Tevye's Dream: Tent Poles
11. Coming Up Roses: Curtain: Act 1
12. Intermission
13. Clambake: Curtain Up: Act 2
14. Suddenly Seymour: The Candy Dish
15. All er Nothin': Beginning to Pack
16. The Little House of Joseph Smith, the American Moses: The Main Event
17. I Thought You Did It for Men Mama: The Next-to-Last Scene
18. You Can't Stop the Beat: The End
19. How Woody Guthrie-of All People- Changed Broadway Musicals Forever: Curtain Call