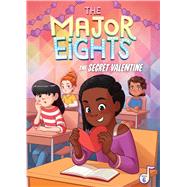 Scarlet is flattered when she finds a sweet message in her locker. But she doesn't know who it's from. Is it fan mail? Or a secret admirer? Can the band figure out the mystery?
Melody Reed is a chapter book, middle grade, and YA author. She loves creating strong female characters and writing about outer space and Mars. She lives in Silicon Valley with her family.

Émilie Pépin is a passionate illustrator whose love for picture books led her to become an illustrator and designer. After completing her studies at the Cégep du Vieux Montréal, Émilie worked for many years in the children's video games industry as a 2-D artist and art director before becoming a freelancer. She lives in the green region of the Laurentians in Québec.