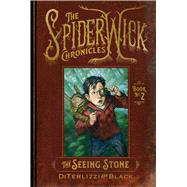 Celebrate the 20th anniversary of the #1 New York Times bestselling Spiderwick Chronicles and get ready for the series soon to be streaming on Disney+ with this second installment in the adventures of the Grace children featuring an all-new look.

Thanks to the mysterious field guide left behind by their long-lost great-great-uncle, Arthur Spiderwick, life for the Grace kids—Jared, Simon, and Mallory—is beyond weird. When Simon goes missing, Jared believes creatures from the faerie world have something to do with it. Mallory is not convinced. That is, until she and Jared contend with a band of menacing, marauding goblins. Simon is clearly in danger, and it’s up to Mallory and Simon to save him before it’s too late.
Tony DiTerlizzi is a #1 New York Times bestselling author and illustrator who has been creating books for twenty years. From fanciful picture books, such as Jimmy Zangwow’s Out-of-This-World Moon-Pie Adventure and The Spider and the Fly (a Caldecott Honor Book), to fantastic middle grade novels like Kenny & the Dragon and the WondLa trilogy, Tony imbues each story with his rich imagination. He created The Spiderwick Chronicles with Holly Black, which has sold millions of copies around the world. You can learn more about Tony at DiTerlizzi.com.