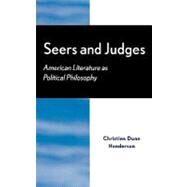 Alexis de Tocqueville asserted that America had no truly great literature, and that American writers merely mimicked the British and European traditions of the eighteenth and nineteenth centuries. This new edited collection masterfully refutes Tocqueville's monocultural myopia and reveals the distinctive role American poetry and prose have played in reflecting and passing judgment upon the core values of American democracy. The essays, profiling the work of Mark Twain, F. Scott Fitzgerald, John Updike, Edith Wharton, Walt Whitman, Henry James, Willa Cather, Walker Percy, and Tom Wolfe, reveal how America's greatest writers have acted as society's most ardent cheerleaders and its most penetrating critics. Christine Dunn Henderson's exciting new work offers literature as a portal through which to view the philosophical principles that animate America's political order and the mores which either reinforce or undermine them.