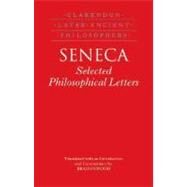 Seneca's Letters to Lucilius are a rich source of information about ancient Stoicism, an influential work for early modern philosophers, and a fascinating philosophical document in their own right. This selection of the letters aims to include those which are of gretest philosophical interest, especially those which highlight the debates between Stoics and Platonists or Aristotelians in the first century AD, and the issue, still important today, of how technical philosophical enquiry is related to the various purposes for which philosophy is practised. In addition to examining the philosophical content of each letter, Brad Inwood's comentary discusses the literary and historical background of the ltters and to their relationship with other prose works by Seneca. Seneca is the earlist Stoic author for whom we ahve access to a large number of complete works, and these works were higly influential in later centuries. He was also a politically influential advisor to the Roman emperor Nero and a celebrated author of prose and verse. His philosophical acuity and independence of mind make his works exciting and challenging for the modern reader.

Brad Inwood is Professor of Philosophy at the University of Toronto.
What is included with this book?