A Sephardi Life in Southeastern Europe: The Autobiography and Journal of Gabriel Arie, 1863-1939 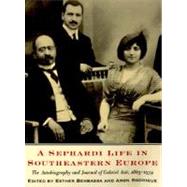 Autobiographical texts are rare in the Sephardi world. Gabriel Arie's writings provide a special perspective on the political, economic, and cultural changes undergone by the Eastern Sephardi community in the decades before its dissolution, in regions where it had been constituted since the expulsion from Spain in 1492. His history is a fascinating memoir of the Sephardi and Levantine bourgeoisie of the time. For his entire life, Arie - teacher, historian, community leader and businessman - was caught between East and West. Born in a small provincial town in Ottoman Bulgaria in 1863, he witnessed the disappearance of a social and political order that had lasted for centuries and its replacement by new ideas and new ways of life, which would irreversibly transform Jewish existence. A Sephardi Life in Southeastern Europe publishes in full the autobiography (covering the years 1863-1906) and journal (1906-39) of Gabriel Arie, along with selections from his letters to the Alliance Israelite Universelle. An introduction by Esther Benbassa and Aron Rodrigue analyzes his life and examines the general and the Jewish contexts of the Levant at the end of the nineteenth and the beginning of the twentieth centuries.
What is included with this book?