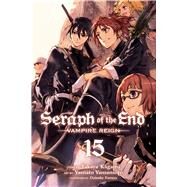 In a post-apocalyptic world of vampires vs. humans, Yuichiro brings vengeance upon his vampire overlords!

After trumpets of the apocalypse proclaim the fall of humanity, vampires arise from the shadows to rule the earth. Yuichiro wants just one thing—to get revenge by killing each and every vampire.

With Ferid and Krul undergoing exposure torture, the only one left who can help Yuichiro and his friends is Guren! But Guren has secrets of his own that he’s willing to hurt his friends to protect. Meanwhile, Kureto wages war in Shibuya against his father in a coup d’état. Will he be able to defeat his father and take over the Demon Army, or will this move spell his own demise?
Takaya Kagami is a prolific light novelist whose works include the action and fantasy series A Dark Rabbit Has Seven Lives, which spawned a manga and anime series, as well as The Legend of Legendary Heroes, which has also been adapted into manga, anime and a video game.