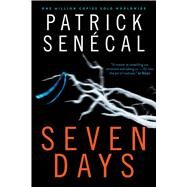 For fans of Stephen King’s Misery and Jo Nesbø’s The Snowman comes an engrossing thriller about a monster who becomes a victim and a victim who becomes a monster. From Patrick Senécal, the Quebec author who has sold over a million books worldwide.

His beloved seven-year-old daughter, Jasmine, is the victim of a tragic crime. Grief-stricken, Hamel sets in play a meticulous plan. He will kidnap the man responsible for his daughter’s death and make him pay horribly for what he has done. He manages to ambush a police transport and disappear with his target.

But Hamel hasn’t accounted for Hervé Mercure, a detective with a troubled past who becomes certain he can track down Hamel by studying clues in his past—and in the increasingly unsettling phone calls Hamel makes to his partner, Sylvie.

Both riveting and provocative, this daring thriller is an enthralling meditation on what it means to be human—and to battle the monster within and without.
Patrick Senécal was born in Drummondville, Quebec. He taught literature and cinema for several years, and, fascinated by suspense, fantasy, and terror, began writing to popular and critical acclaim in his native Quebec. Three of his novels have been adapted for film, and three other adaptations are currently under development in Quebec. He lives in Montreal, Canada, with his wife and two children. Visit him at PatrickSenecal.net.