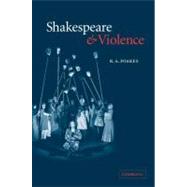 Shakespeare and Violence connects to current anxieties about the problem of violence, and shows how similar concerns are central in Shakespeare's plays. At first Shakespeare exploited spectacular violence for its entertainment value, but his later plays probe more deeply into the human propensity for gratuitous violence, especially in relation to kingship, government and war. In these plays and in his major tragedies he also explores the construction of masculinity in relation to power over others, to the value of heroism, and to self-control. Shakespeare's last plays present a world in which human violence appears analogous to violence in the natural world, and both kinds of violence are shown as aspects of a world subject to chance and accident. This book is the first to examine the development of Shakespeare's representations of violence and to explain their importance in shaping his career as a dramatist.
What is included with this book?