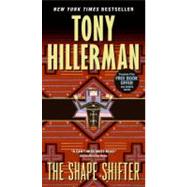 Since his retirement from the Navajo Tribal Police, Joe Leaphorn has been called on occasionally by his former colleagues to help them solve a puzzling crime. And Leaphorn, aided by Jim Chee and Bernie Manuelito, always delivers. But this time, the problem is with an old case of Joe's --his "last case," unsolved and haunting him. And with Chee and Bernie on their honeymoon, Leaphorn is on his own. The case involved a priceless Navajo rug gone missing. Now, years later, Leaphorn is picking up the threads of a crime he'd thought impossible to solve. Hillerman is at the top of his form in this atmospheric and stunning novel.
The Shape Shifter

Lieutenant Joe Leaphorn, retired, stopped his pickup about a hundred yards short of where he had intended to park, turned off the ignition, stared at Sergeant Jim Chee's trailer home, and reconsidered his tactics. The problem was making sure he knew what he could tell them, and what he shouldn't, and how to handle it without offending either Bernie or Jim. First he would hand to whomever opened the door the big woven basket of fruit, flowers, and candies that Professor Louisa Bourbonette had arranged as their wedding gift, and then keep the conversation focused on what they had thought of Hawaii on their honeymoon trip, and apologize for the duties that had forced both Louisa and him to miss the wedding itself. Then he would pound them with questions about their future plans, whether Bernie still intended to return to her job with the Navajo Tribal Police. She would know he already knew the answer to that one, but the longer he could keep them from pressing him with their own questions, the better. Maybe he could avoid that completely. It wasn't likely. His answering machine had been full of calls from one or the other of them. Full of questions. Why hadn't he called them back with the details of that Totter obituary he wanted them to look into? Why was he interested? Hadn't he retired as he'd planned? Was this some old cold case he wanted to clear up as a going away present to the Navajo Tribal Police? And so forth.

Louisa had provided him with a choice of two solutions. Just go ahead and swear them both to secrecy and tell them the whole truth and nothing but the truth. Or just say he simply couldn't talk about it because it was all totally confidential.

"Don't forget, Joe," Louisa had said, "they're both in the awful gossiping circuit you police people operate. They're going to be hearing about the murders, and the shooting, and all the rest of it, and by the time it gets passed along second-, third-, and fourth-hand, it's all going to seem a lot more horrible than what you told me." With that, Louisa had paused, shaken her head, and added: "If that's possible."

Both of Louisa's suggestions were tempting, but neither was practical. Chee and Bernie were both sworn-in officers of the law (or Bernie would be again as soon as the papers were signed) and telling them everything he knew would put them in an awful ethical position. Sort of the same position he had landed in himself, which he really didn't want to think about right now.

Instead he'd think about Chee and Bernie, starting with how Bernie had already seemed to have a civilizing influence on Jim, judging from the nice white curtains Leaphorn could see in the trailer's windows, and&#8212even more dramatic—the attractive blue-and-white mailbox with a floral design substituted for the rusty old tin box that had always before received Chee's mail. Not, Leaphorn guessed, that many people had been writing to Jim.

Leaphorn restarted his engine and began the slow drive toward the house. Just as he did, the door opened. And there was Bernie, waving to him, and Chee right behind her, big grin on his face. Quit worrying, Leaphorn told himself. I'm going to enjoy this. And he did.

Chee took the basket, looking as if he had no idea what to do with it. Bernie rescued it, declaring it was just what they needed and how thoughtful it was of him and Louisa, and how the basket was beautifully woven, neatly waterproofed with pinyon sap, and would long be treasured. Then came the hand shaking, and the hugs, and inside for coffee and conversation. Leaphorn kept it on the Hawaii trip as long as he could, listening to Bernie's report on her arrangements to rejoin the tribal police and her chances of being assigned to Captain Largo's command and being posted at Teec Nos Pos, which would be convenient, presuming that Chee would still be working out of Shiprock.

And so it went, coffee sipped, cookies nibbled, lots of smiling and laughing, exuberant descriptions of swimming in the cold, cold Pacific surf, a silly scene in which an overenthusiastic Homeland Security man at the Honolulu Airport had been slapped by an elderly woman he was frisking, had seized her, and had been whacked again by her husband, who turned out to be a retired, oft-decorated Marine Corps colonel. This resulted in the Homeland Security supervisor wanting the colonel arrested, and an airport official, who turned out to be an army survivor of the Korean War, apologizing to the colonel's wife and giving the Homeland Security pair a loud public lecture on American history. All happy, easy, and good-natured.

But then Sergeant Jim Chee said: "By the way, Lieutenant, Bernie and I have been wondering what got you interested in the Totter obituary. And why you never called us again. We would have been willing to do some more checking on it for you."

"Well, thanks," Leaphorn said. "I knew you would do it, but I knew of a fellow living right there in Oklahoma City who sort of volunteered for the job. No use bothering you honeymooners again. By the looks of things, you've decided to settle in right here. Right? Great place, here, right on the bank of the San Juan River."

But that effort to change the subject didn't work.

"What did he find out for you?" Bernie asked.

Leaphorn shrugged. Drained his coffee cup, extended it toward Bernie, suggesting the need for a refill. "Didn't amount to anything," he said. "Great coffee you're making, Bernie. I bet you didn't follow Chee's old formula of 'too little grounds, boiled too long.'"

Chee was grinning at Leaphorn, ignoring the jibe.

"Come on, Lieutenant, quit the stalling. What'd you find out? And what got you so interested in the first place?"

The Shape Shifter. Copyright © by Tony Hillerman. Reprinted by permission of HarperCollins Publishers, Inc. All rights reserved. Available now wherever books are sold.

Excerpted from The Shape Shifter by Tony Hillerman
All rights reserved by the original copyright owners. Excerpts are provided for display purposes only and may not be reproduced, reprinted or distributed without the written permission of the publisher.