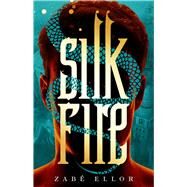 Set in a planet-sized matriarchal city where magic and technology freely bleed together, a male courtesan’s quest for vengeance against his aristocrat father draws him into an ancient struggle between dragons, necromancers, and his home district’s violent history.

In the world-sized city of Jadzia, magic and ancient science merge into something dark and wondrous.

Koré’s life is consumed by power, politics, sex and vengeance, and as courtesan to the wealthy and powerful, he is privy to all manner of secrets. He knows meddling in politics is dangerous─still, he is willing to risk everything to stop his father from seizing the Imperial Throne of the War District. But Koré soon finds the corruption runs far deeper than just one man.

During a tryst in an ancient tomb─in the pursuit of political influence─Koré encounters a dying god, who imbues him with the powers of one of the city’s sacred dragons. Suddenly Koré finds himself a hunted man, threatened with becoming a pawn by whoever finds him first.

If the wrong person discovers his secret and lays claim to his powers they would plunge their world into war, unleash untold horrors and destroy the city─and the two people he has come to love.
Zabé Ellor is a literary agent with The Jennifer De Chiara Literary Agency, and all-around creative nerd from Washington D.C. His debut title May the Best Man Win will be released with Roaring Brook Press/Macmillan in Spring 2021. Zabé graduated from Cornell University in 2016 with a dual degree in biology and English. An avid reader and writer, his non-literary interests include running, travel, and finding the perfect dim sum.
What is included with this book?