The Silver Linings Playbook A Novel 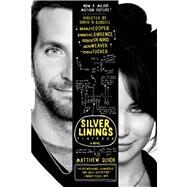 A heartwarming debut novel, soon to be a major movie by David O. Russell "Aawww shucks!" NPR's Nancy Pearl said. "I know that's hardly a usual way to begin a book review, but it was my immediate response to finishing Matthew Quick's heartwarming, humorous and soul-satisfying first novel . . . This book makes me smile." Meet Pat Peoples. Pat has a theory: his life is a movie produced by God. And his God-given mission is to become physically fit and emotionally literate, whereupon God will ensure him a happy endingthe return of his estranged wife, Nikki. (It might not come as a surprise to learn that Pat has spent several years in a mental health facility.) The problem is, Pat's now home, and everything feels off. No one will talk to him about Nikki; his beloved Philadelphia Eagles keep losing; he's being pursued by the deeply odd Tiffany; his new therapist seems to recommend adultery as a form of therapy. Plus, he's being haunted by Kenny G! David O. Russell, the Oscar-nominated director of The Fighter, is helming his own adaptation of The Silver Linings Playbook. Due in theaters this Thanksgiving, the movie features Bradley Cooper ( Peoplemagazine's Sexiest Man Alive) in the role of Pat, alongside Jennifer Lawrence, Robert De Niro, Julia Stiles, Chris Tucker, and Jacki Weaver. As the award-winning novelist Justin Cronin put it: "Tender, soulful, hilarious, and true, The Silver Linings Playbookis a wonderful debut."

In the six months that followed his leaving teaching and the Philadelphia area, Matthew Quick floated down the Peruvian Amazon and formed ‘The Bardbarians’ (a two-man literary circle), backpacked around Southern Africa, hiked to the bottom of a snowy Grand Canyon, soul-searched, and finally began writing full-time.

Matthew earned his Creative Writing MFA through Goddard College. He has since returned to the Philadelphia area, where he lives with his wife and their greyhound.

“Matthew Quick has created quite the heartbreaker of a novel in The Silver Linings Playbook.” —from the Kirkus First Fiction Issue

“Matthew Quick is a natural storyteller, and his Silver Linings Playbook—honest, wise, and compassionate—is a story that carries the reader along on a gust of optimism. Without shying away from the difficulties of domestic life, it charts a route past those challenges, and leaves us with a lingering sense of hope. More than a promising debut or an inspiring love story, this novel offers us the gift of healing.” —Roland Merullo, author of In Revere, In Those Days

“You don’t have to be a Philadelphia Eagles’ fan (or even from Philadelphia) to appreciate talented newcomer Matthew Quick’s page-turning paean to the power of hope over experience—the belief that this will all work out somehow, despite the long odds that life deals us. Tender, soulful, hilarious, and true, The Silver Linings Playbook is a wonderful debut.” —Justin Cronin, PEN/Hemingway Award-winning author of Mary and O'Neil and The Summer Guest

“The hero of Matthew Quick’s first novel is Pat Peoples, amnesiac optimist and absolute original, whose dysfunctional journey takes him from big-league fandom to competitive dance and a host of other modern preoccupations. This is a funny, touching performance on the part of Mr. Quick—and the beginning, I hope, of a big career.” —Dave King, author of The Ha-Ha

“Entertaining and heartfelt and authentic, The Silver Linings Playbook magically binds together love, madness, Philadelphia Eagles football, faith, family and hard-earned hope into a story that is both profound and wonderfully beguiling. This is a splendid novel, written by a big-time talent.” —Martin Clark, author of The Many Aspects of Mobile Home Living and The Legal Limit

“I loved The Silver Linings Playbook. It is warm, funny, and moving.”  —Shawn McBride, author of Green Grass Grace