The Sisters Are Alright, Second Edition Changing the Broken Narrative of Black Women in America 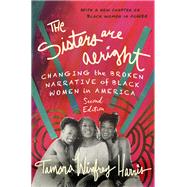 A slew of harmful stereotypes continues to follow Black women. The second edition of this bestseller debunks vicious misconceptions rooted in long-standing racism and shows that Black women are still alright.

The latest edition of this bestseller features new interviews with diverse Black women about marriage, motherhood, health, sexuality, beauty, and more. Alongside these authentic experiences and fresh voices, Winfrey Harris explores the evolution of stereotypes of Black women, with new real-life examples, such as the rise of blackfishing and digital blackface (which help white women rise to fame) and the media’s continued fascination with Black women’s sexuality (as with Cardi B or Megan Thee Stallion).

The second edition also includes a new chapter on Black women and power that explores how persistent stereotypes challenge Black women’s recent leadership and achievements in activism, community organizing, and politics. The chapter includes interviews with activists and civic leaders and interrogates media coverage and perceptions of Stacey Abrams, Vice President Kamala Harris, and others.

Winfrey Harris exposes anti–Black woman propaganda and shows how real Black women are pushing back against racist, distorted cartoon versions of themselves. She counters warped prejudices with the straight-up truth about being a Black woman in America.
Tamara Winfrey Harris is a writer whose work has appeared in the Chicago Sun-Times, In These Times, and Ms. and Bitch magazines and online at the American Prospect, Salon, the Guardian, Newsweek/Daily Beast, xoJane, the Huffington Post, Psychology Today, Clutch magazine, and Change.org. She has been called to address women’s issues in major media outlets, such as NPR’s Weekend Edition. The Sisters Are Alright is Foreword Reviews’ 2015 INDIEFAB Book Awards in Women’s Studies.
What is included with this book?