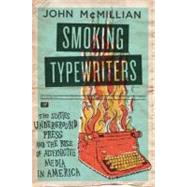 How did the New Left uprising of the 1960s happen? What caused millions of young people--many of them affluent and college educated--to suddenly decide that American society needed to be completely overhauled? In Smoking Typewriters , historian John McMillian shows that one answer to these questions can be found in the emergence of a dynamic underground press in the 1960s. Following the lead of papers like the Los Angeles Free Press , the East Village Other , and the Berkeley Barb , young people across the country launched hundreds of mimeographed pamphlets and flyers, small press magazines, and underground newspapers. New and cheap printing technologies had democratized the publishing process, and by the decade's end the combined circulation of underground papers stretched into the millions. Though not technically illegal, these papers were often genuinely subversive, and many who produced and sold them--on street-corners, at poetry readings, gallery openings, and coffeehouses--became targets of harassment from local and federal authorities. With writers who actively participated in the events they described, underground newspapers captured the zeitgeist of the '60s, speaking directly to their readers, and reflecting and magnifying the spirit of cultural and political protest. McMillian gives special attention to the ways underground newspapers fostered a sense of community and played a vital role in shaping the New Left's "movement culture." By putting the underground press at the forefront, McMillian underscores the degree to which the political energy of the 1960s emerged from the grassroots, rather than the national office of Students for a Democratic Society (SDS), which historians of the era typically highlight. Deeply researched and eloquently written, Smoking Typewriters captures all the youthful idealism and vibrant tumult of the 1960s as it delivers a brilliant reappraisal of the origins and development of the New Left rebellion.
John McMillian is the co-editor of The Radical Reader: A Documentary History of an American Radical Tradition (2005), The New Left Revisited (2003), Protest Nation: The Radical Roots of Modern America (2010), and founding editor of The Sixties: A Journal of History, Politics and Culture.
What is included with this book?