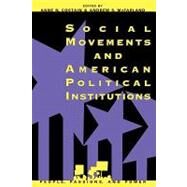 Social movements in the United States are important political actors because of their scale and duration, their generation of new ideas and understandings of existing problems, their ability to mobilize those who were previously passive citizens, and the impetus they provide for restructuring and broadening the agenda of American politics. This volume combines chapters by a distinguished group of social movement scholars, from both sociology and political science, who use perspectives ranging from political process theory to rational choice and collective action approaches to evaluate the functioning of institutions of American government and the public policies that they produce. A diverse group of movements and interests are featured: women, public interest, native America, the environment, the Christian Right, abortion, gay rights, and homelessness among them.
What is included with this book?