Society and Nature: A Sociological Inquiry 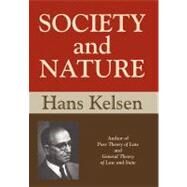 The influential jurist Hans Kelsen [1881-1973] here applies his concept of the distinction between society and nature. He shows how primitive man developed his interpretation of nature, through the laws of retribution and of causality, to a modern concept of nature and society. He holds that the gradual emancipation of the law of causality from the principle of retribution is "the emancipation from a social interpretation of nature. The process shows a relation between social and natural science which is ver
What is included with this book?