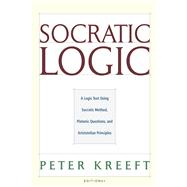 This book is simple and user-friendly. It is highly interactive, with a plethora of exercises and a light, engaging style. Most beginners need a back to basics logic text rather than the latest overpriced one with state-of-the-art bells and whistles that they will never use outside class.

It is designed for do-it-yourselfers as well as classrooms. It emphasizes topics in proportion to probable student use: e.g., interpreting ordinary language, not only analyzing but also constructing effective arguments, smoking out hidden assumptions, making argument maps, andusing Socratic method in various circumstances. It is divided into eighty-eight mini-chapters for maximum mix-and-match flexibility

Peter Kreeft is the author of over 40 books, including A Refutation of Moral Relativism, Summa of the Summa, Christianity for Modern Pagans: A Commentary on Pascal's Penseés, and C.S. Lewis for the Third Millennium.

An excerpt from chapter 1:

(This section can be omitted without losing anything you will need later on in the book. It’s here both to satisfy the advanced student’s curiosity and to sell the approach of this book to prospective teachers who may question its emphasis on Aristotelian rather than symbolic logic, by justifying this choice philosophically.)
Almost four hundred years before Christ, Aristotle wrote the world’s first logic textbook. Actually it was six short books, which collectively came to be known as the Organon, or “instrument.” From then until 1913, when Bertrand Russell and Alfred North Whitehead published Principia Mathematica, the first classic of mathematical or symbolic logic, all students learned Aristotelian logic, the logic taught in this book.
The only other “new logic” for twenty-four centuries was an improvement on the principles of inductive logic by Francis Bacon’s Novum Organum (“New Or-ganon”), in the 17th century, and another by John Stuart Mill, in the 19th century.
(Inductive reasoning could be very roughly and inadequately defined as reasoning from concrete particular instances, known by experience, while deduction reasons from general principles. Induction yields only probability, while deduction yields certainty. “Socrates, Plato and Aristotle are mortal, therefore probably all men are mortal” is an example of inductive reasoning; “All men are mortal, and Socrates is a man, therefore Socrates is mortal” is an example of deductive reasoning.)
Today nearly all logic textbooks use the new mathematical, or symbolic, logic as a kind of new language system for deductive logic. (It is not a new logic; logical principles are unchangeable, like the principles of algebra. It is more like changing from Roman numerals to Arabic numerals.) There are at least three reasons for this change:

(1) The first and most important one is that the new logic really is superior to the old in efficiency for expressing many long and complex arguments, as Arabic numerals are to Roman numerals, or a digital computer to an analog computer, or writing in shorthand to writing in longhand.
However, longhand is superior to shorthand in other ways: e.g. it has more beauty and elegance, it is intelligible to more people, and it gives a more personal touch. That is why most people prefer longhand most of the time – as most beginners prefer simpler computers (or even pens). It is somewhat similar in logic: most people “argue in longhand,” i.e. ordinary language; and Aristotelian logic stays close to ordinary language. That is why Aristotelian logic is more practical for beginners.
Even though symbolic language is superior in sophistication, it depends on commonsense logic as its foundation and root. Thus you will have a firmer foundation for all advanced logics if you first master this most basic logic. Strong roots are the key to healthy branches and leaves for any tree. Any farmer knows that the way to get better fruit is to tend the roots, not the fruits. (This is only an analogy. Analogies do not prove anything – that is a common fallacy – they only illuminate and illustrate. But it is an illuminating analogy.)
Modern symbolic logic is mathematical logic. “Modern symbolic logic has been developed primarily by mathematicians with mathematical applications in mind.” This from one of its defenders, not one of its critics (Henry C. Bayerly, in A Primer of Logic. N.Y.: Harper & Row, 1973, p.4).
Mathematics is a wonderful invention for saving time and empowering science, but it is not very useful in most ordinary conversations, especially philosophical conversations. The more important the subject matter, the less relevant mathematics seems. Its forte is quantity, not quality. Mathematics is the only totally clear, utterly unambiguous language in the world; yet it cannot say anything very interesting about anything very important. Compare the exercises in a symbolic logic text with those in this text. How many are taken from the Great Books? How many are from conversations you could have had in real life?

(2) A second reason for the popularity of symbolic logic is probably its more scientific and exact form. The very artificiality of its language is a plus for its defenders. But it is a minus for ordinary people. In fact, Ludwig Wittgenstein, probably the most influential philosophical logician of the 20th century, admitted, in Philosophical Investigations, that “because of the basic differences between natural and artificial languages, often such translations [between natural-language sentences and artificial symbolic language] are not even possible in principle.” “Many logicians now agree that the methods of symbolic logic are of little practical usefulness in dealing with much reasoning encountered in real-life situations” (Stephen N. Thomas, Practical Reasoning in Natural Language, Prentice-Hall, 1973).
– And in philosophy! “However helpful symbolic logic may be as a tool of the . . . sciences, it is [relatively] useless as a tool of philosophy. Philosophy aims at insight into principles and into the relationship of conclusions to the principles from which they are derived. Symbolic logic, however, does not aim at giving such insight” (Andrew Bachhuber, Introduction to Logic (New York: Appleton-Century Crofts, 1957), p. 318).

The Problem of “Material Implication”
The following issue is quite abstract and difficult, though I shall try to make it as simple as possible. It is included because I believe it shows that “something is rotten in the state of Denmark” at the very heart of the new logic. (For a fuller treatment of the new logic see the Appendix, p. 364.)
Logic is most especially about reasoning, or inference: the process of thinking by which we draw conclusions from evidence, moving from one proposition to another. The proposition we begin with is called a “premise” and the proposition we move to, or infer, or reason to, is called a “conclusion.”
The simplest and most straightforward kind of reasoning is to move from a true premise (or, more usually, from a number of true premises together) to a true conclusion. But we can also use false propositions in good reasoning. Since a false conclusion cannot be logically proved from true premises, we can know that if the conclusion is false then one of the premises must also be false, in a logically valid argument.
A logically valid argument is one in which the conclusion necessarily follows from its premises. In a logically valid argument, if the premises are true, then the conclusion must be true. In an invalid argument this is not so. “All men are mortal, and Socrates is a man, therefore Socrates is mortal” is a valid argument. “Dogs have four legs, and Lassie has four legs, therefore Lassie is a dog” is not a valid argument. The conclusion (“Lassie is a dog”) may be true, but it has not been proved by this argument. It does not “follow” from the premises.
Now in Aristotelian logic, a true conclusion logically follows from, or is proved by, or is “implied” by, or is validly inferred from, only some premises and not others. The above argument about Lassie is not a valid argument according to Aristotelian logic. Its premises do not prove its conclusion. And common sense, or our innate logical sense, agrees. However, modern symbolic logic disagrees. One of its principles is that “if a statement is true, then that statement is implied by any statement whatever.” Since it is true that Lassie is a dog, “dogs have four legs” implies that Lassie is a dog. In fact, “dogs do not have four legs” also implies that Lassie is a dog! Even false statements, even statements that are self-contradictory, like “Grass is not grass,” validly imply any true conclusion in symbolic logic. And a second strange principle is that “if a statement is false, then it implies any statement whatever.” “Dogs do not have four legs” implies that Lassie is a dog, and also that Lassie is not a dog, and that 2 plus 2 are 4, and that 2 plus 2 are not 4.
This principle is often called “the paradox of material implication.” Ironically, “material implication” means exactly the opposite of what it seems to mean. It means that the matter, or content, of a statement is totally irrelevant to its logically implying or being implied by other statements. Common sense says that Lassie being a dog or not being a dog has nothing to do with 2+2 being 4 or not being 4, but that Lassie being a collie and collies being dogs does have something to do with Lassie being a dog. But not in the new logic, which departs from common sense here by totally sundering the rules for logical implication from the matter, or content, of the propositions involved. Thus, the paradox ought to be called “the paradox of non-material implication.”
The paradox can be seen in the following imaginary conversation:

In this logic, if the premise and the conclusion are both false, the premise implies the conclusion (this is #4), and if the premise is false and the conclusion is true, the premise also implies the conclusion (this is #3). So if the moon is blue, then the moon is red (#4); and if the moon is blue, then the moon is not blue (#3)! This may make some defensible sense mathematically, but it certainly does not make sense commonsensically, for it does not seem to make sense in the real world.
Logicians have an answer to the above charge, and the answer is perfectly tight and logically consistent. That is part of the problem! Consistency is not enough. Logic should be not just a mathematically consistent system but a human instrument for understanding reality, for dealing with real people and things and real arguments about the real world. That is the basic assumption of the old logic. If that assumption is naïve and uncritical, unfashionable and unintelligent – well, welcome to Logic for Dummies.