SOMEONE TO WATCH OVER ME MM 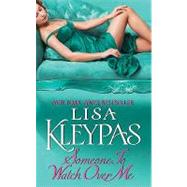 She couldn't remember who she was...A temptingly beautiful woman awakens in a stranger's bed, rescued from the icy waters of the Thames, her memory gone. Told that she is Vivien Rose Duvall, one of London's most scandalous beauties, she finds herself under the protection of enigmatic, charming Grant Morgan. Her life is in his hands. Deep in her heart, she knows he has mistaken her for someone else... He was the only man she could trust. As one of London's most eligible, and unattainable catches, Grant Morgan is a man who has known every kind of woman. And the one in his arms now seems so innocent, so vulnerable, that he can't help but be enchanted. And as his love for this mysterious beauty grows, he's determined to unravel the secrets of her past and discover the truth-no matter what.
What is included with this book?

Someone to Watch over Me

Lily Brewster and her brother, Robert, sat in the dining room of the mansion known as Grace and Favor Cottage. Robert was at the head of the long table reading the New York Times and mumbling to himself as he sipped his morning coffee and grimaced. "Lily, is Mrs. Prinney watering this stuff down? It hasn't got any taste."

"I think she is. She said something chirpy about chicory tasting just like coffee." Lily nearly had to shout to be heard at the other end. Lily was, as usual, doing the household books and had receipts, scrap paper, pencil, and pen spread around her while she munched on her toast with her left hand.

Between them, halfway along, was their boarder, Phoebe Twinkle, the dainty young redheaded village milliner and seamstress. "Where is Mrs. Prinney?" she said, touching a napkin to her lips.

She closed her ledger and capped her late mother's fountain pen, tidied up her piles of paperwork, picked up her plate and silverware, and went to sit between the others so she didn't have to scream to be heard.

"Should this be worrying us, Robert? Or is she just taking up a new hobby?"

Robert, who was seldom without a grin and a smart crack, was uncharacteristically solemn. "Haven't you been to the greengrocer's lately? There's almost nothing there except what that local woman grows."

"But not even Roxanne Anderson can possibly grow enough for the whole town," Phoebe put in.

"The farmer can't buy enough seeds or hire help," Robert went on. "The middleman can't afford to ship produce around the country, and that hurts the railroads. Dominoes falling. Or a downward spiral, if you want to look at it that way."

Lily had been working hard at trying (but failing) to ignore the country's deteriorating financial situation. She ran her hands through her hair and admitted, "I hate this. It just gets worse and worse. Thank goodness the Democrats have nominated Governor Roosevelt for President. At least he can't make more of a mess of the economy than Hoover."

"Unless it completely collapses before he takes office—if he wins," Robert added. "The election is months away, and the new President doesn't take office until next March. Anything could happen by then."

"You think Hoover could be reelected?" Lily asked in alarm.

Robert looked at his sister and realized he'd frightened her more than he should have. Not that he wasn't terrified. While President Hoover made weekly announcements of how the economy was improving, it was obvious that everyday life for almost everyone was getting much, much worse. "No, Governor Roosevelt will be elected. He's the only governor who's actually done demonstrably good things for his own state. He's beaten the state legislature into funding a few public works projects. Now I've got to change clothes for my own project."

"And what's that?" Lily asked.

"With Mr. Prinney's permission I hired a couple of young men from the village, the Harbinger boys, to help me tear down the old icehouse. There's some good sturdy wood in it that someone could put to use."

"The icehouse? How will we cool things?" Lily asked.

"Not the one behind the pantry," Robert said, rolling his eyes. "The one in the woods."

Lily looked at him as if he were mad.

"No can do," Lily said. "Phoebe and I are on our way to a special meeting of the VLL."

"Robert, how could you forget?" Lily said. "The Voorburg Ladies League. It's the first meeting I've been invited to. It's quite an honor and might mean the village is accepting us as real people."

Robert made an exaggerated motion of slapping his head. "Stupid of me," he said sarcastically. "How can you bear to be around that White woman who runs it?"

Phoebe and Lily exchanged a look; Phoebe answered. "She's not really so bad when you get to know her."

Robert waved this away. "I've met her. To my sorrow. She's a runaway locomotive."

"But I hear she means well, Robert," Lily objected. "Her manner is bossy, but people say her ideas are usually good. She just got back from a visit to Philadelphia and told Phoebe she's had a brainstorm about how we can help others in Voorburg. An emergency meeting. Phoebe, are you ready to go?"

The two young women gathered their handbags and the canvas bag with their good shoes and set out to take the shortcut through the woods and down the hill to town. Though there wasn't much traffic on the road, it wound around so much that it was at least four times the length of the old Indian path from the hills overlooking the river.

They would change from their sturdy shoes to their nice ones once they were close to the village of Voorburgon-Hudson. Phoebe had alerted Lily that Mrs. White was obsessed with appearances, and while they wouldn't admit it to Robert, neither of them wanted to be accused of bad taste in footwear. Especially not by Mrs. White, who was always immaculately dressed, thoroughly corseted—and well shod.

Phoebe Twinkle, who had been in Voorburg longer than Lily and seldom had access to an automobile, was much more surefooted on the steep path than Lily, but she held back with good grace and set her pace to her companion's.

"I don't really know very much about Mrs. White except that she scares me to death," Lily said to Phoebe. "Has she lived here long?"

"All her life, as far as I know," Phoebe said, pulling aside a branch of a decrepit maple that really should be trimmed. "My former landlady talks about knowing her since..."

Someone to Watch over Me. Copyright © by Lisa Kleypas. Reprinted by permission of HarperCollins Publishers, Inc. All rights reserved. Available now wherever books are sold.

Excerpted from Someone to Watch over Me by Lisa Kleypas
All rights reserved by the original copyright owners. Excerpts are provided for display purposes only and may not be reproduced, reprinted or distributed without the written permission of the publisher.