Somewhere There Is Still a Sun A Memoir of the Holocaust 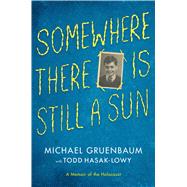 Resilience shines throughout Michael Gruenbaum’s “riveting memoir” (Publishers Weekly, starred review) about his time in the Terezin concentration camp during the Holocaust, in this National Jewish Book award finalist and Parents Choice Gold medal award winning title, an ideal companion to the bestselling Boy on the Wooden Box.

Michael “Misha” Gruenbaum enjoyed a carefree childhood playing games and taking walks through Prague with his beloved father. All of that changed forever when the Nazis invaded Prague. The Gruenbaum family was forced to move into the Jewish Ghetto in Prague. Then, after a devastating loss, Michael, his mother and sister were deported to the Terezin concentration camp.

At Terezin, Misha roomed with forty other boys who became like brothers to him. Life in Terezin was a bizarre, surreal balance—some days were filled with friendship and soccer matches, while others brought mortal terror as the boys waited to hear the names on each new list of who was being sent “to the East.”

Those trains were going to Auschwitz. When the day came that his family’s name appeared on a transport list, their survival called for a miracle—one that tied Michael’s fate to a carefully sewn teddy bear, and to his mother’s unshakeable determination to keep her children safe.

Collaborating with acclaimed author Todd Hasak-Lowy, Michael Gruenbaum shares his inspiring story of hope in an unforgettable memoir that recreates his experiences with stunning immediacy. Michael’s story, and the many original documents and photos included alongside it, offer an essential contribution to Holocaust literature.
Michael Gruenbaum was born in 1930 in Prague, Czechoslovakia. In 1942, he was sent to the concentration camp Theresienstadt, or Terezin, with his mother and sister, and remained there until the end of the war. He emigrated to the United States in 1950, graduated from MIT and Yale, served two years in the Army, and worked for the Boston Redevelopment Authority and Mass. Dept. of Public Works, before cofounding a consulting firm. He was married for fifty years to the late Thelma Gruenbaum, author with Michael of Nesarim: Child Survivors of Terezin. He has three sons and four grandchildren. Visit him at MichaelGruenbaum.com.

Todd Hasak-Lowy has published several books for adults. 33 Minutes was his first book for young readers and he made his YA debut with Me Being Me Is Exactly as Insane as You Being You. He lives with his wife and two daughters in Evanston, Illinois.
What is included with this book?