Somniphobia: An AFK Book (Five Nights at Freddy's: Tales from the Pizzaplex #3) 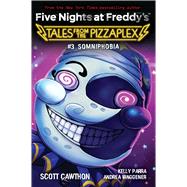 What are you running from? . . . Sam is afraid of just about anything and everything thats unhealthy ever since his father died . . . Something about the Springtrap costume in the roleplaying area of Freddy Fazbears Mega Pizzaplex chills Luca to the core . . . And Gradys fear of being trapped in small spaces makes working as a Pizzaplex technician extremely challenging. But in the world of Five Nights at Freddy's, our deepest fears have a way of chasing us . . .

Readers beware: This collection of terrifying tales is enough to rattle even the most hardened Five Nights at Freddy's fans.

Scott Cawthon is the author of the bestselling video game series Five Nights at Freddy's, and while he is a game designer by trade, he is first and foremost a storyteller at heart. He is a graduate of The Art Institute of Houston and lives in Texas with his family.
What is included with this book?