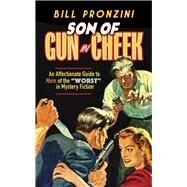 "I could hardly wait to begin the investigation. Somehow, I firmly believed that (at last!) we were following a course that would clearly reveal — something!" — from The Stingaree Murders
"The [police] men saluted in the darkness and stole away with furtive tread. They knew the anticlimax was at hand, and their satisfaction was unbounded." — from The Merrivale Mystery
"It beats the devil. It's diabolical. It's fiendish. It's just not right." — from The Palgrave Mummy
A humorous and good-natured study of alternative crime fiction, the Edgar Award-nominated Gun in Cheek celebrated the neglected classics of substandard mystery writing. After years of additional research into comically awful literature, author Bill Pronzini returns with Son of Gun in Cheek, a compendium of even more twisted treasures for connoisseurs of hideous prose. Pronzini's lively commentary offers background on each of the stories he cites, providing an informative survey of the genre and its writers, crowned with hilarious excerpts. His lighthearted look at the best of the worst in crime fiction will amuse not only mystery buffs but also anyone with a taste for ham-handed drama.
American author and anthologist Bill Pronzini has written scores of short stories and novels, including Snowbound, which was awarded the Grand Prix de la Littérature Policière as France's best crime novel of 1988. His numerous other honors include the "Grand Master" designation from the Mystery Writers of America; six Edgar nominations; and three Shamus awards.
Modus Operandi1 The Alternative Hall Of Fame, Part I; Or, "Justice Isn't Functioning Very Shipshape"2 Of Talking Skeletons, Noseless Monsters, And Boomalacka Browne3 Gold Is Where You Find It4 The Amazing Adventures Of The Kracked King of Keelerland5 The Shame Of Black Mask, And Other Pulp Paydirt6 "Loaded To The Gunwale With Superpowered Quake-Stuff To Make Your Withers Quiver"7 Sex, Sex, And More Sex!8 Big Brother Is Watching9 Confessions Of A B-Movie Junkie10 Titles, Anyone?11 Hail To The Chief!12 The Alternative Hall Of Fame, Part II; Or, "Inspiration Splattered Me In the Face Like A Custard Pie"Post-MortemBibliographyIndex