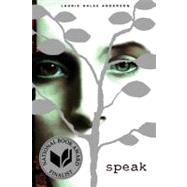 Freshman year at Merryweather High is notgoing well for Melinda Sordino. She busted an end-of-summer party by calling the cops, and now her friendsand even strangersall hate her. So she stops trying, stops talking. She retreats into her head, and all the lies and hypocrisies of high school become magnified, leaving her with no desire to talk to anyone anyway. But it's not so comfortable in her head, eitherthere's something banging around in there that she doesn't want to think about. She can't just go on like this forever. Eventually, she's going to have to confront the thing she's avoiding, the thing that happened at the party, the thing that nobody but her knows. She's going to have to speak the truth.
Laurie Halse Anderson is a New York Times bestselling author of books for kids of all ages--including Fever 1793, Chains, Twisted, and many others. Known for tackling tough subjects with humor and sensitivity, her work has earned numerous national and state awards, as well as international recognition. Two of her books, Speak and Chains, were National Book Award finalists. Anderson was honored with the 2009 Margaret A. Edwards Award given by the YALSA division of the American Library Association for her “significant and lasting contribution to young adult literature.” Anderson was born in Potsdam, New York in 1961. Growing up, she loved reading and listening to family stories. She graduated from Georgetown University in 1984. Before becoming a full-time writer, she was freelance journalist, and then worked part-time at a bookstore to earn money while working on her fiction. Mother of four and wife of one, Laurie lives in northern New York, where she likes to watch the snow fall as she writes.
“In a stunning first novel, Anderson uses keen observations and vivid imagery to pull readers into the head of an isolated teenager. . . . Yet Anderson infuses the narrative with a wit that sustains the heroine through her pain and holds readers’ empathy. . . . But the book’s overall gritty realism and Melinda’s hard-won metamorphosis will leave readers touched and inspired.”—Publishers Weekly, Starred Review
“An uncannily funny book even as it plumbs the darkness, Speak will hold readers from first word to last.”—The Horn Book, Starred Review
“A frightening and sobering look at the cruelty and viciousness that pervade much of contemporary high school life, as real as today’s headlines. . . . The plot is gripping and the characters are powerfully drawn . . . a novel that will be hard for readers to forget.”—Kirkus Reviews, Pointer Review
“Melinda’s pain is palpable, and readers will totally empathize with her. This is a compelling book, with sharp, crisp writing that draws readers in, engulfing them in the story.”—School Library Journal
“A story told with acute insight, acid wit, and affecting prose.”—Library Journal
“Melinda’s voice is distinct, unusual, and very real as she recounts her past and present experiences in bitterly ironic, occasionally even amusing vignettes. . . . Melinda’s sarcastic wit, honesty, and courage make her a memorable character whose ultimate triumph will inspire and empower readers.”—Booklist
A Michal L. Printz Honor Book
A National Book Award Finalist
An Edgar Allan Poe Award Finalist
A Los Angeles Times Book Prize Finalist
Winner of the SCBWI Golden Kite Award
An ALA Top Ten Best Book for Young Adults
An ALA Quick Pick
A Publishers Weekly Best Book of the Year
A Booklist Top Ten First Novel
A BCCB Blue Ribbon Book
A School Library Journal Best Book of the Year
A Horn Book Fanfare Title
A New York Times Bestseller
A Publishers Weekly Bestseller