The Spook's Tale and Other Horrors 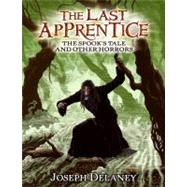 The Last Apprentice series follows the terrifying adventures of the Spook's apprentice, Thomas Ward. But Tom's is only one story. There are others. . . .The Spook himself was once an apprentice. How did he begin his training?And what of Alice, the young witch who is Tom's closest ally? How did she overcome her dark past?What did the witch assassin Grimalkin do to become the most deadly and feared witch in the county?And, collected in a gallery of horrors, discover the rest of the county's menacing villains and relive the vicious battles waged against them.Enter a land where creatures of the dark creep out of the shadows. Do you dare?
What is included with this book?

The Last Apprentice: The Spook's Tale
And Other Horrors

When I was really young, perhaps no older than six or seven, I had a terrible nightmare. It began as a pleasant dream. I was sitting on a hearth rug in the small front room of our cramped row house in Horshaw. I was gazing into a coal fire, watching the sparks flicker and dance before they disappeared up the chimney. My mam was also in the room. She was knitting. I could hear the rhythmical click-click of her needles, and I felt really happy and safe. But then, over the noise of the knitting needles, I heard the dull thud of approaching footsteps. At first I thought they were outside, where my dad and brothers were working, but with a growing sense of unease I realized they were coming from the cellar. Who could possibly be down in our cellar? The sound of the heavy boots on stone grew louder. They were climbing the steps toward the kitchen, and I knew that, whatever it was, it was coming to get me. The air suddenly developed a distinct chill—not the cold that winter brings; this was something else.

In the nightmare I tried to call out to my mam for help, but I couldn't make a sound. I was mute and paralyzed, frozen to the spot. The boots came nearer and nearer, but my mam just carried on sitting and knitting while my terror slowly increased. The fire flickered and died in the grate and the room grew colder and darker with each ominous approaching footstep. I was terrified, panic and dread building within me by the second.

A dark shadow shaped like a man entered the room. He crossed to where I cowered by the fire, and before I had a chance to move or cry out, he picked me up and put me under his arm. Then he took me back into the kitchen and began to descend the cellar steps, each clump of his big boots taking me deeper and deeper. I knew that I was having a nightmare and realized I had to wake myself up before I was taken into the absolute darkness at the foot of the cellar steps.

Struggling and straining with all my might, I somehow managed to do it just in time. I awoke, panting with fear, my brow wet with sweat, trembling at the thought of what had almost happened.

But my nightmare didn't happen just once. It came to me time and time again over the course of several years. After a while I had to tell someone, so I confided in my brother Paul. I was afraid that he might laugh, that he might mock me for being so terrified of a dream. But to my surprise his eyes widened, and with a shaking voice, he revealed that he had been having exactly the same nightmare! At first I could scarcely believe him—but it was true! We had both been dreaming the same dream. In some ways it was a comfort, but what could this strange coincidence mean? Together we reached an important agreement.

If you were in the dream and managed to escape it, you had to wake your brother, because he might still be trapped in that nightmare, awaiting his turn to be taken down the cellar steps. Many's the night when I was sleeping peacefully, not dreaming at all, and my brother would shake me by the shoulder. I'd wake up blazing with anger, ready to thump him. But then he'd whisper in my ear, his eyes wide, his face terrified, his bottom lip trembling:

I was instantly glad I hadn't thumped him—otherwise next time he might not wake me when I was having the nightmare and needed his help!

Although we told ourselves this was just a dream, there was one thing that terrified us both. We felt absolutely sure that, if we were ever taken into the dark at the foot of the cellar steps, we would die in our sleep and be trapped in that nightmare forever!

One night as I lay awake, I heard disturbing noises coming from the cellar. At first I thought I was in the dream, but slowly, with a shudder of fear, I realized these were waking sounds, not dreaming sounds. Someone was digging into the soft earth of the cellar floor with a shovel. I felt that strange unnatural coldness again and heard boots climbing the stone steps, just as they did in my nightmare. Covering my ears to block out the sounds was hopeless, because they didn't stop. Eventually, scared almost witless and weeping in distress, I screamed out into the darkness.

That wasn't the only time it happened, and my family's patience started to wear thin. Another night, angered by the fact that I'd woken them all up again, my dad dragged me down the cellar steps, threw me into the darkness, and nailed the door shut, leaving me alone and trapped there.

"Please, Dad! Please. Don't leave me here in the dark!" I pleaded.

"You'll stay there until you learn to stop waking us up!" he retorted. "We've all got work in the morning. Think of your brothers and your poor mam. It's about time you grew up!"

"Please, Dad! Give me another chance!" I begged, but he didn't relent.

He was a good man but also hard—that's why he put me in that dark, terrifying cellar. He didn't realize what I could see and hear: things other people couldn't, things that would make the hairs on the back of your neck stand up and your heart hammer hard enough to break out of your chest. Although I didn't know it at the time, it was a consequence of what I was. I was the seventh son and my dad had been a seventh son before me. For me, the world was a very different place. I could both see and hear the dead; sometimes I could even feel them. As I sat on the cold cellar floor, I heard things approaching me in the dark, seeking me out with cold fingers and whispers, taking forms that only I could see.

The Last Apprentice: The Spook's Tale
And Other Horrors. Copyright © by Joseph Delaney. Reprinted by permission of HarperCollins Publishers, Inc. All rights reserved. Available now wherever books are sold.

Excerpted from The Spook's Tale: And Other Horrors by Joseph Delaney
All rights reserved by the original copyright owners. Excerpts are provided for display purposes only and may not be reproduced, reprinted or distributed without the written permission of the publisher.