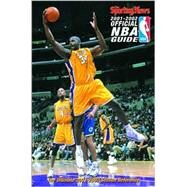 The Official NBA Guide covers the past, present, and future--all in one resource! Readers get the scoop on every team since its inception, and the players that made the NBA what it is today, such as Bob Cousy, "Dr. J" Julius Erving, Michael Jordan, and now Kobe Bryant. From team-by-team and year-by-year histories to reviews of the 2000–'01 season to a look ahead to the 2001–'02 season, this is a must-have for fans and broadcasters alike! Easy-to-use team-by-team schedules, as well as a league day-by-day schedule, plus a list of national television games Includes updated official rules of the NBA