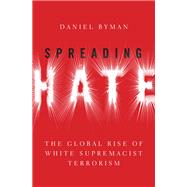 Spreading Hate examines the evolution of the white power movement around the world, explaining its appeal and the threat it poses as well as many failures.

The modern white power movement is now a global, transnational phenomenon. In this sweeping, authoritative account, Daniel Byman traces the key moments in the white power movement's evolution in the United States and around the world and then details its many facets today. Using a wide range of sources, Byman explodes several myths about white power terrorism and exposes dangerous gaps in current policies.

For almost two decades since 9/11, white supremacist terrorism has been relegated to a secondary concern in the US and Europe despite the fact that it was clearly metastasizing. This neglect has led to shocking episodes of violence from New Zealand to Norway to South Carolina and has eroded faith in Western democratic institutions. Because white power terrorists' grievances echo mainstream debates and their violence often exacerbates polarization, their political impact can be inordinately high even if the body count is low. As Byman stresses, they are not a hide-bound movement seeking to turn back the clock, but are dynamic, drawing on ideas from around the world and exploiting the most cutting-edge technologies, especially social media.

White power terrorists, however, have many weaknesses. They are divided, with poor leadership, and often attract the incompetent and the criminal as well as the dangerous and deluded. If governments act decisively and treat white power terrorism with the same urgency they use to manage jihadist violence, then the threat can be reduced. This will require aggressive law enforcement, international intelligence cooperation, crackdowns by technology companies, and other forceful steps. Considering policy solutions as well as synthesizing a vast body of scholarly research, Spreading Hate will be essential reading for anyone worried about this an increasingly networked movement that threatens to grow more dangerous in the years to come.

Daniel Byman is a professor at Georgetown University and a senior fellow at Brookings. He is a widely published and nationally recognized expert on terrorism. Byman was a US government analyst and a staff member on the 9/11 Commission, among other positions. His most recent books include A High Price: The Triumphs and Failures of Israeli Counterterrorism (Oxford); Al Qaeda, the Islamic State, and the Global Jihadist Movement (Oxford) and Road Warriors: Foreign Fighters in the Armies of Jihad (Oxford).
What is included with this book?