Standards-based Accountability under No Child Left Behind : Experiences of Teachers and Administrators in Three States 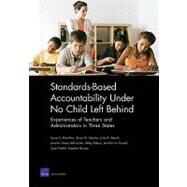 Since 2001-2002, standards-based accountability (SBA) provisions of the No Child Left Behind Act of 2001 (NCLB) have shaped the work of public school teachers and administrators in the United States. NCLB requires each state to develop content and achievement standards in several subjects, administer tests to measure students' progress toward these standards, develop targets for performance on these tests, and impose a series of interventions on schools and districts that do not meet the targets. Many states had such systems in place before NCLB took effect, but, since 2001-2002, every state in the United States has had to develop and implement an SBA system that met the requirements of the law, and its provisions have affected every public school and district in the nation. This book sheds light on how accountability policies have influenced attitudes and been translated into actions at the district, school, and classroom levels in three states, with a focus on mathematics and science. SBA is leading to an increased emphasis on student achievement, and many educators laud this focus, but a single-minded emphasis on student proficiency on tests has some potentially negative consequences such as narrowing curriculum and declining staff morale.
What is included with this book?