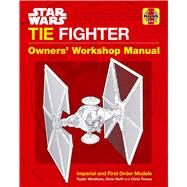 Just as the Galactic Empire used great fleets of starships to expand Imperial control across the galaxy, the subsequent authoritarian government, the First Order, used even more technologically advanced ships to unify planetary systems and crush all opposition. With both regimes, the most abundant and ubiquitous ships in their respective fleets were the notoriously lethal TIE fighters.

Ryder Windham is the author and co-author of many Star WarsTM books. His previous collaborations with artists Chris Reiff and Chris Trevas include the YT-1300 Millennium Falcon Owners’ Workshop Manual and Death Star Owner’s Workshop Manual.

Chris Reiff is an illustrator and product designer who has been working on Star Wars for more than 20 years. Among his other recent projects are product development for Anovos and Disney as well as Star Wars product packaging.