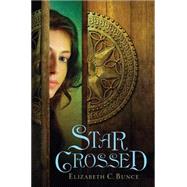 Sixteen-year-old Digger thrives as a spy and sneak-thief among the feuding religious factions of Llyvraneth, dodging the Greenmen who have banned all magic from the city. But when a routine job goes horribly wrong and her partner and lover Tegen is killed, she has to get out of the land, fast, and hides herself in a merry group of nobles to do so. Accepted as a ladyÂs maid to shy young Merista Nemair, Digger finds new peace and friendship at the Nemair stronghold--as well as plenty of jewels for the taking. But after the devious Remy Daul catches her in the act of thievery, he blackmails her into becoming his personal spy in the castle, and Digger soon realizes her noble hosts arenÂt as apolitical as she thought--that indeed, she may be at the heart of a magical rebellion.Brilliantly combining the richness of fantasy with the twists and turns of the best spy stories, StarCrossed proves Elizabeth C. Bunce is a writer whoÂs here to stay.
Elizabeth C. Bunce's first novel, A CURSE DARK AS GOLD, won the ALA's William C. Morris Award for a YA debut. Elizabeth cuts, sews, and embroiders both cloth and stories at her home near Kansas City, Missouri. Please visit her website at www.elizabethcbunce.com.
From StarCrossed:What happened? I couldn't slow the images spinning in my mind enough to make sense of them. We'd finished the job; we should have been safe. Tegen had thrown an arm around me and kissed me. I had laughed, the blood rushing through my veins. Hass's clients would have the letters, I'd have fifteen crowns and Tegen would have me. Everything had gone perfectly.Until the men in the green slammed through the doors and wrenched Tegen off me, a flashing silver blade easing through the separation. A bloom of red sprang up on Tegen's knife, a burst of blackness blinded me, and for a moment I couldn't breathe. And then, Tegen's voice: Digger, run!