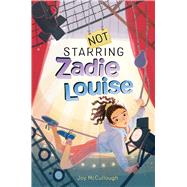 In this “entertaining and moving” (Kirkus Reviews) middle grade novel that’s perfect for fans of Tim Federle and Gordon Korman, Zadie is determined to spend the summer helping at the community theater—but things go hilariously awry!

Zadie loves Tae Kwon Do, comic books, and outer space. She also loves visiting the community theater that her mom runs, especially the lighting grid over the stage and the stage manager’s booth, which is filled with levers and buttons like a spaceship control panel. So when the family’s finances suffer a blow and Zadie has to give up her usual activities to spend the summer at the theater, she doesn’t mind too much. After all, she’s always wanted to tech a show.

She knows she’d be great at it, but her mom and the new stage manager are totally opposed to the idea of having a kid do tech. Instead, Zadie’s stuck handing out snacks and folding flyers. But the future of the theater rides on this show, and Zadie is determined to help. She’s going to make Spinderella the hit of the season—unless she accidentally turns it into a disaster.
Joy McCullough writes books and plays from her home in the Seattle area, where she lives with her husband and two children. She is the author of the middle grade novels Across the Pond, A Field Guide to Getting Lost, and Not Starring Zadie Louise and the picture books Harriet’s Ruffled Feathers and Champ and Major: First Dogs. Her debut novel Blood Water Paint was longlisted for the National Book Award and was a William C. Morris Debut Award Finalist. Visit her at JoyMcCullough.com.
What is included with this book?