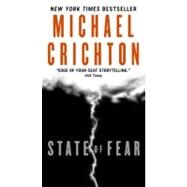 In Tokyo, in Los Angeles, in Antarctica, in the Solomon Islands . . . an intelligence agent races to put all the pieces together to prevent a global catastrophe.
State of Fear

In the darkness, he touched her arm and said, "Stay here." She did not move, just waited. The smell of salt water was strong. She heard the faint gurgle of water.

Then the lights came on, reflecting off the surface of a large open tank, perhaps fifty meters long and twenty meters wide. It might have been an indoor swimming pool, except for all the electronic equipment that surrounded it.

And the very strange device at the far end of the pool.

Jonathan Marshall came back to her, grinning like an idiot. "Qu'estce que tu penses?" he said, though he knew his pronunciation was terrible. "What do you think?"

"It is magnificent," the girl said. When she spoke English, her accent sounded exotic. In fact, everything about her was exotic, Jonathan thought. With her dark skin, high cheekbones, and black hair, she might have been a model. And she strutted like a model in her short skirt and spike heels. She was half Vietnamese, and her name was Marisa. "But no one else is here?" she said, looking around.

Jonathan Marshall was twenty-four, a graduate student in physics from London, working for the summer at the ultra-modern Laboratoire Ondulatoire-the wave mechanics laboratory-of the French Marine Institute in Vissy, just north of Paris. But the suburb was mostly the residence of young families, and it had been a lonely summer for Marshall. Which was why he could not believe his good fortune at meeting this girl. This extraordinarily beautiful and sexy girl.

"My pleasure," Marshall said. He moved to the large control panel and began to switch on the pumps and sensors. The thirty panels of the wave machine at the far end of the tank clicked, one after another.

He glanced back at her, and she smiled at him. "It is so complicated," she said. She came and stood beside him at the control panel. "Your research is recorded on cameras?"

"Yes, we have cameras in the ceiling, and on the sides of the tank. They make a visual record of the waves that are generated. We also have pressure sensors in the tanks that record pressure parameters of the passing wave."

"These cameras are on now?"

"Perhaps we are," she said, resting her hand on his shoulder. Her fingers were long and delicate. She had beautiful fingers.

She watched for a minute, then said, "This room, everything is so expensive. You must have great security, no?"

"Not really," he said. "Just cards to get in. And only one security camera." He gestured over his shoulder. "That one back in the corner."

She turned to look. "And that is turned on?" she said.

"Oh yes," he said. "That's always on."
She slid her hand to caress his neck lightly. "So is someone watching us now?"

"Then we should behave."

"Probably. Anyway, what about your boyfriend?"

"Him." She gave a derisive snort. "I have had enough of him."

Earlier that day, Marshall had gone from his small apartment to the café on rue Montaigne, the café he went to every morning, taking a journal article with him to read as usual. Then this girl had sat down at the next table, with her boyfriend. The couple had promptly fallen into an argument.

In truth, Marshall felt that Marisa and the boyfriend didn't seem to belong together. He was American, a beefy, red-faced fellow built like a footballer, with longish hair and wire-frame glasses that did not suit his thick features. He looked like a pig trying to appear scholarly.

His name was Jim, and he was angry with Marisa, apparently because she had spent the previous night away from him. "I don't know why you won't tell me where you were," he kept repeating.

"It is none of your business, that's why."

"But I thought we were going to have dinner together."

"No, you told me you were. And I was waiting at the hotel for you. All night."

"So? No one made you. You could go out. Enjoy yourself."

"But I was waiting for you."

"Jimmy, you do not own me." She was exasperated by him, sighing, throwing up her hands, or slapping her bare knees. Her legs were crossed, and the short skirt rode up high. "I do as I please."

"Yes," she said, and at that moment she turned to Marshall and said, "What is that you are reading? It looks very complicated."

At first Marshall was alarmed. She was clearly talking to him to taunt the boyfriend. He did not want to be drawn into the couple's dispute.

"It's physics," he said briefly, and turned slightly away. He tried to ignore her beauty.

"What kind of physics?" she persisted.

"Ah. And clearly intelligent. You are English? Why are you in France?"

And before he knew it, he was talking to her, and she introduced the boyfriend, who gave Marshall a smirk and a limp handshake. It was still very uncomfortable, but the girl behaved as if it were not.

"So you work around here? What sort of work? A tank with a machine? Really, I can't imagine what you say. Will you show me?"

And now they were here, in the wave mechanics laboratory. And Jimmy, the boyfriend, was sulking in the parking lot outside, smoking a cigarette.

"What shall we do about Jimmy?" she said, standing beside Marshall while he worked at the control panel.

"I will see that he does not. But I don't want to make him more angry.

State of Fear. Copyright © by Michael Crichton. Reprinted by permission of HarperCollins Publishers, Inc. All rights reserved. Available now wherever books are sold.

Excerpted from State of Fear by Michael Crichton
All rights reserved by the original copyright owners. Excerpts are provided for display purposes only and may not be reproduced, reprinted or distributed without the written permission of the publisher.