State Of The Union Addresses 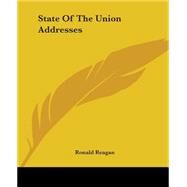 Just 10 days ago, after months of debate and deadlock, the bipartisan Commission on Social Security accomplished the seemingly impossible. Social security, as some of us had warned for so long, faced disaster. I, myself, have been talking about this problem for almost 30 years. As 1983 began, the system stood on the brink of bankruptcy, a double victim of our economic ills. First, a decade of rampant inflation drained its reserves as we tried to protect beneficiaries from the spiraling cost of living. Then the recession and the sudden end of inflation withered the expanding wage base and increasing revenues the system needs to support the 36 million Americans who depend on it.
What is included with this book?