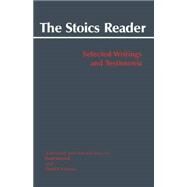 This volume gathers together the most important evidence about Stoic thought surviving from the ancient world. It is an expanded version of the section on Stoicism in Inwood and Gerson's Hellenistic Philosophy, consolidating related texts into larger, more continuous selections, adding material on the skeptical attack on Stoicism, and a short section that introduces the reader to some of the more interesting texts on Stoic ethics from the Roman imperial period. Inwood and Gerson provide lucid, accurate translations, an Introduction that sets the works included in historical and philosophical context, a glossary of terms, a glossary of philosophers and philosophical sources, an index of passages translated, and a subject index.
What is included with this book?