The Story of Greenwich 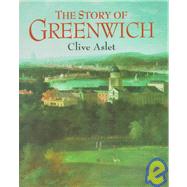 To open this book is to enter a world of living history, of pomp and pageantry, royal fiats and popular revolutions, naval exploits and mercantile triumphs, and soaring scientific achievements. This is the world of Greenwich, England, home of a now mysterious temple in the days of the ancient Romans and of the Millennium Dome in our own, biding its time on the Thames and, flush with the line of longitude zero, keeping the time of the world. Clive Aslet conducts us through the streets and byways of this storied city, showing us scenes from its prodigious history at every turn. His richly illustrated book is a journey through time as it has been lived, and marked, in this city like no other in the world. Here Sir Walter Raleigh laid down his cloak for Elizabeth I. Here Elizabeth signed the death warrant for Mary, Queen of Scots. A place of royal haunts and regal courting, Greenwich was also the site of Wat Tyler's revolt in the fourteenth century. Home to the navy that supported the world's greatest maritime empire, the city saw the funeral of England's most celebrated naval hero, Admiral Horatio Nelson. Aslet revisits these events, immersing us in courtly drama and popular ferment, cosmopolitan grandeur and bustling commerce. He shows us the remarkable buildings that hold so much of Greenwich's history, from the palaces embellished by Henry VIII to the structures designed by England's renowned architects--from Christopher Wren and Inigo Jones--to the observatories that house the massive telescopes and nautical clocks that have put Greenwich at the forefront of scientific invention and discovery. Whether recalling the literary marks that writers such as Marlowe and Dickens have left on the city, or tracking London's first railway into Greenwich, or recounting the tales of navigators and statesmen, monarchs and common and uncommon folk, this book tells the story of Greenwich for all time.
Clive Aslet is the editor of Country Life and the author of several books, including The American Country House.
What is included with this book?