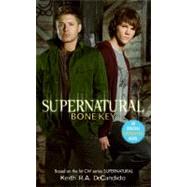 Twenty-two years ago, Sam and Dean Winchester lost their mother to a mysterious and demonic supernatural force. In the years after, their father, John, taught them about the paranormal evil that lives in the dark corners and on the back roads of America . . . and he taught them how to kill it.Sam and Dean are headed for Key West, Florida, home to Hemingway, hurricanes, and a whole lot of demons. The tropical town has so many ghouls on the loose that one of its main moneymakers has long been a series of ghost tours. But the tours are no more, not since one of the guides was found dead of an apparent heart attack . . . his face frozen in mid-scream. No one knows what horrors he saw, but the Winchester brothers are about to find out.Soon they'll be face-to-face with the ghosts of the island's most infamous residents, demons with a hidden agenda, and a mysterious ancient power looking for revenge. It's up to Sam and Dean to save the citizens of Key West . . . before the beautiful island is reduced to nothing more than a pile of bones.
Supernatural: Bone Key

This is the best way to celebrate Christmas and New Year's, Megan Ward thought as she took another gulp of the heavy amber beer that some guy had bought for her, thinking it would get him somewhere.

A resounding bass line made her ribs vibrate, the drums echoing, the guitar slicing through the air like a buzz saw. Megan couldn't remember the name of the power trio that was playing at the Hog's Breath Saloon tonight, but she was enjoying their music. They were a cover band, like most musicians who played the Duval Street bars on Key West, sticking with the usual classic rock favorites. Right now, they were doing "Magic Carpet Ride." The lead singer was a woman with a deep, throaty voice, and she also played the guitar, scorching through the Steppenwolf licks.

They had the volume up loud enough to be heard on Duval—the Hog's Breath had a large gravel-covered parking lot between it and the Duval Street sidewalk—and so the music could be heard around the giant tree in the center of the fenced-in, open-air bar. Megan was grateful for this for a variety of reasons, not least being it made it easy to ignore the guy who bought her the beer. She didn't turn it down, of course—free booze was free booze, especially on a college student's meager budget—but she wasn't about to let him have his way with her, either. Especially since he spit when he talked, which was just gross. Besides, it was just a beer. If he'd bought her a gin and tonic or a screwdriver, then maybe, but just a beer? Forget it.

After the human spit-take gave up and moved on to some other chick, Megan actually had one of the small, raised round tables with the high stools to herself. The table was located right between the two bars—the main one in the center of the Hog's Breath and the small one by the parking-lot entrance. That was bound not to last, as there was a steady stream of people in and out of the Hog's Breath on this Saturday night. Some came in from the parking-lot entrance, as Megan had, past that smelly guy who was selling his poetry. Others came from the back entrance on Front Street. She was grateful that she at least didn't have a view of the television behind the smaller bar. A whole bunch of dumb jock types were gathered around watching a college football game.

If Megan had wanted to spend the week after Christmas watching big dumb guys scream over what happened in a football game, she'd have gone back home to Atlanta and her redneck stepfather and stepbrothers.

Mom was all weepy about her little girl not being home for Christmas, but Megan pointed out that she wasn't "her little girl," she was a twenty-two-year-old adult who was trying to get a bachelor's degree at Boston College, and that Mom herself was the only person who'd be in the house that Christmas whom she didn't want to punch in the nose.

Megan didn't blame Mom for remarrying after Dad died in that car accident. Mom had never done the alone thing very well, and a teenage daughter wasn't sufficient, especially since Megan was trying to, y'know, have a life. Mom had met Harry in grief counseling, as he was a widower as well, his own wife having died during a liquor-store robbery. He had three sons, and Megan was hard-pressed to decide which one was the worst—;Harry Jr., who kept exposing himself to her at every opportunity, Billy, who kept grabbing at her chest and whom she caught once going through her underwear drawer, or little Joey, who set up a web-cam in the bathroom and uploaded a video of Megan showering to the Internet.

Of course, Mom kept insisting that they didn't mean any harm by it, and the boys were just being boys. Since Harry Jr. was twenty-nine and Billy was Megan's age, this didn't really fly, and as for Joey's "prank," Megan had had to hide in her dorm for two months after the shower video had been downloaded by half of BC's campus.

So no going home for Christmas. But there was no way in hell she was staying in Boston, either. Nice place and all, but the winters were just brutal for a Georgia gal.

Instead, she came down to Key West. She'd been saving the money she made at the Starbucks on Commonwealth Avenue, managed to get a cheap flight to Key West on the Internet, got a room at a nice bed-and-breakfast right on Duval Street—easy stumbling distance from the bars—and spent her holidays here in a tropical paradise.

Megan loved Key West. Her favorite thing wasn't the bars, the live music, the beautiful weather, the friendly people, the laid-back attitude, the fantastic seafood—though she loved all those things—it was the fact that every single night on Key West they celebrated the sunset. Every night, folks gathered at the boardwalk and on Front Street and watched the sun go down over the Gulf of Mexico, cheering and celebrating and drinking beer. The boardwalk was filled with vendors and performers, and it was a wonderful party. At first, Megan had thought it to be a onetime thing that she was lucky enough to have arrived in time for, but she soon learned that it was a daily occurrence.

Tonight, she skipped the sunset celebration. She just wanted to sit and listen to music. She'd spent the day playing tourist, going to several of the wrecker museums, the "Little White House," the Hemingway Home and Museum, and the lighthouse, and her feet were killing her.

About the only thing that hadn't happened yet was getting laid. Megan had never been good at the boyfriend thing, especially since she kept winding up with boneheads like her stepbrothers. Plus, after the web-cam incident, she couldn't bring herself even to talk to most of the guys on campus.

Excerpted from Bone Key by Keith R. A. DeCandido, DC Comics Staff
All rights reserved by the original copyright owners. Excerpts are provided for display purposes only and may not be reproduced, reprinted or distributed without the written permission of the publisher.