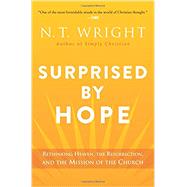 "For years Christians have been asking, "If you died tonight, do you know where you would go?" It turns out Christians have been giving the wrong answer. It is not heaven. One of today's premier Bible scholars and award-winning author N.T. Wright outlines the present confusion about a Christian's future hope and shows how it is deeply intertwined with how we live today. Wright shows that Christianity's most distinctive idea is bodily resurrection. First, he provides a magisterial defense of a literal resurrection of Jesus himself. This became the cornerstone for the Christian community's hope in the bodily resurrection of all people at the end of the age. Next Wright explores our expectation of "new heavens and new earth," showing what happens to the dead until then and what will happen with the "second coming" of Jesus. For many, including many Christians, all this will come as a great surprise. Wright convincingly argues that what we believe about life after death directly affects what we believe about life before death. For if God intends to renew the whole creation - and if this has already begun in Jesus's resurrection - the church cannot stop at "saving souls" but must anticipate the eventual renewal by working for God's kingdom in the wider world, bringing healing and hope in the present life. Lively and accessible, this book will surprise and excite all who are interested in the meaning of life, not only after death but, before it"--
What is included with this book?